TPB Pick of the Week: Ant-Man Season One 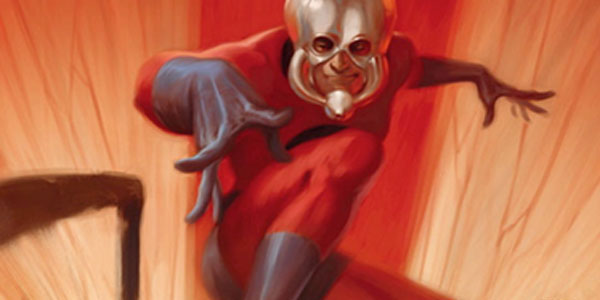 Let’s get to know the man behind the tech from Marvel Studios’ newest movie.

Legendary writer Tom DeFalco and acclaimed artist Horacio Domingues deliver a new origin of the original Avenger, Ant-Man!  Hank Pym has had a life full of adventure and success, as well as failure and humiliation. Known by a variety of names such as Ant Man, Giant-Man, Goliath and Yellow Jacket, Pym has been an innovative scientist, a famed super-hero, an abusive spouse and more.  What demons drive a man like him? How did he begin his career as a super-hero? Ant-Man Season One tells the story of the man behind the myth and reveals the fears and paranoia that propelled him to his greatest heights and darkest depths.

Ant-Man Season One is a new origin story for the hero.  It differs some from the original but it is an awesome one shot story that captures most of the key parts of Stan Lee’s telling.  We see Pym deal with his discovery of Pym Particles and develop the technology to communicate with ants, and the story does a good job of portraying Hank as a flawed individual who is reluctant to become a super hero. The story touches on the death of Hank’s first wife, his subsequent breakdown over it, and his attempt to pick up the pieces of his life.

The main villain of the story is Egghead (Elias Starr), who steals the Ant-Man technology from Hank. These two have a long history in the comics and he was a great choice for a villain. The story doesn’t take itself too seriously and the art reflects this. There are several cool depictions of Ant-Man’s powers such as a shrunken Pym fighting a spider, an aerial air battle with swarms of flying ants and yellow jackets, people being chased by 8 foot tall bees, and a fight between two 60 foot giants. In short, it’s a great year one story.

After reading this book I can see that it was this version of Hank that we saw in the movie and I was okay with that. Many fans that I spoke with at the comic shop are not as into this origin as they were the original, but for me I had no issues with it. JQ gives Ant Man Season One a 7/10.