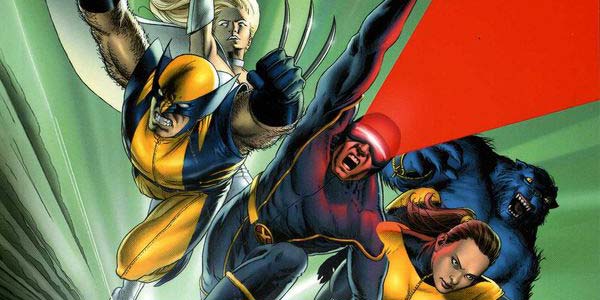 Joss Whedon and John Cassaday present the explosive flagship X-Men series, marking a return to classic greatness and the beginning of a brand-new era for the X-Men!

Growing up, I was just as big a fan of the X-Men as I was Batman. I collected X-Men, Uncanny X-Men, occasional issues of X-Force, X-Factor, Wolverine, and the various other character specific series and minis. Next to Batman, those books were just the best. Then Grant Morrison and company began their run, and I was appalled. I realize many liked his take on the team, but to me, they weren’t the X-Men. That was the whole point, really– to come up with something that was completely new and different, in Morrison’s “love it or hate it” style. It was that, but to me, it wasn’t the X-Men. Through the black leather, secondary mutations, and lord only knows what else, I vowed never to pick up another X-book. Then Marvel did the smartest thing they ever could have, hiring Joss Whedon to write his own X-Men book. Not only is Whedon a huge fan of the X-Men, but he’s also one hell of a writer. The guy’s proven time and again that he can blend drama, comedy, action, and believable characters like no one else.

Astonishing X-Men begins with a rebuilding period for the characters, which I feel is only appropriate, given how many wayward readers were also finding their way back to the mutant heroes. Kitty Pryde is, appropriately enough, our point of view character for the first issue. Kitty’s finally been allowed to grow up, so she’s fresh out of college and ready to start her role as a teacher at the recently rebuilt Xavier’s Institute. The rest of the team, hand selected by Joss Whedon himself, include Cyclops (now head of the Institute), Emma Frost (the former White Queen of the Hellfire Club, and one of the X-Men’s greatest foes), Wolverine (of course), and Beast. Colossus is brought in later. Right away, there are conflicts within the team (a trademark of the X-Men that hasn’t been handled this well in a couple of decades). Wolverine and Cyclops are at odds because Cyclops is shacking up with Emma Frost when the dirt is still fresh on his wife’s grave (yes, Jean Grey is dead again). Kitty is extremely uncomfortable with Emma’s presence at the school. The White Queen and her Hellfire Club were among the X-Men’s deadliest foes, up there with Magneto, Apocalypse, or Mr. Sinister. Now she’s one of them, and she’s together with Cyclops (which currently is the norm for the All New Marvel Now). Wolverine is at odds with Beast, whom he feels is betraying the X-Men by studying a supposed “cure” for mutancy. Yeah, Logan’s mad at just about everyone here, save Kitty. Their relationship easily slides back into place after all this time.

The art fits the story well. John Cassaday’s style took a bit of getting used to (because up until this time I was all too familiar with the Jim Lee/ John Byrne/ Michael Turner penciled books). Cassaday’s style is very realistic; he manages the awesome feat of giving each character a very distinct face and body type. So many artists these days have a sort of “male figure” and “female figure” talent range, and each character model is simply a transmogrified version of that. The colors are also very well done, which in this day of digital coloring is no surprise. But here, they’re used to very good effect, complimenting Cassaday’s realistic pencils. The way it all comes together, you almost feel like you’re reading an adaption of an X-Men TV show, written by Joss Whedon.

This book seemed to have set the springboard for what Marvel dove into as the new era team that has been basically the same since the launch of Marvel Now.  Let’s see how things match up after Secret Wars…  JQ gives this book a 8/10.