It’s time to Assemble and Roll Out! What in the world could unite Earth’s Mightiest Heroes and the Autobots? 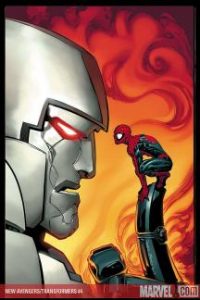 Stuart Moore and Tyler Kirkham bring together fan-faves like Wolverine, Megatron, Spider-Man, and Optimus Prime in this awesome adventure. Fans of both franchises were a little skeptical of this cross over at first due to the huge backstory on all the characters and where it all fits in.

Discovering a non-human structure and an army of destroyed Doombots, The Avengers attempt to force their way inside, only to be met with deadly attacks. Spider-Man is captured as the others force their way out, with the team beginning to fight among themselves. An observing Optimus Prime decides to take the Autobots to counter the threat, as Megatron reveals to a captured Spider-Man that one of Doom’s devices is responsible for the tensions, and they prepare to experiment on his mutated DNA.

Prime’s order for them to leave is met by a full attack by the Avengers. As the fight continues, Doom intervenes and places a device on Captain America’s neck that instantly calms him down. After he manages to talk down his some of his team the rest of the Avengers talk to the Autobots, and Doom reveals that the Avengers’ heightened aggression was caused by a device he developed which was stolen by the Decepticons. Doom departs to attempt to reach a diplomatic solution to the conflict with Symkaria, leaving the Autobots and the Avengers to storm the Decepticon base to rescue Spider-Man. As Iron Man (in his new Transformerbuster Armor) and Megatron face off outside the base, the Autobots track down Spider-Man, subsequently freeing him with the aid of Doctor Doom (who has turned on the Decepticons after they betrayed him). In the end the Avengers and Autobots find a way to turn the tide and win the day. 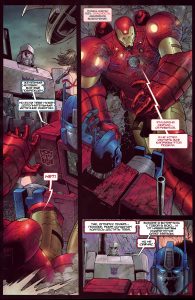 As far as this story goes, the situation has a very good backdrop for the meeting. From a Transformers perspective, it seems to fit right in. The characters in the book are well written to fit into the general types we’d expect from each of these. Spider-Man is wisecracking, Wolverine is on the edge, and now that I think about it, we get much more characters from the Marvel side than we really get from the Transformers. I would say that the only memorable Transformer is really Megatron. The others play their parts but the Autobots really take a back seat to the Avengers as the heroes of the story.

The comic was well drawn by Kirkham and the flow of the dialogue and action panels was very easy to follow. My only gripe that it was only four issues.