TPB Pick of the Week- Batgirl (Vol 3.) Death of the Family 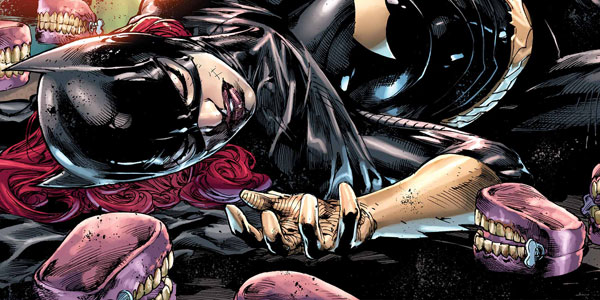 DC’s New 52 reboot came with no small share of controversies, few as heated as the decision to “de-chair” Barbara Gordon, formerly Batgirl. While I don’t come at this from a political perspective, I enjoyed Gordon’s Oracle persona. There’s a lot to be said for a character who works almost entirely “between her ears,” and it made those times when she kicked butt against those who invaded her lair all the more enjoyable.  In the New 52 continuity, Barbara’s paralysis at the hands of the Joker was only temporary– she’s psychologically scarred, but physically able as ever. If you questioned that decision for her character, you’ll likely find yourself reassured by this TPB in which she must again confront the Joker. Indeed, with the exception of Snyder’s Batman volume, this is almost certainly the best work in the Death of the Family story arc. Barbara has a very personal stake in ending Joker’s reign of terror and appears to be willing to go to extremes to accomplish it. She begins to approach some tough moral territory, and Simone handles this conflict very well.

The reason actually as much to do with Barbara/ Batgirl as it does with Gail Simone’s excellent use of Barbara’s sociopath brother, James Gordon Jr. Remorseless and humorless James Jr makes a surprisingly good counterpart to the Joker’s peculiar insanity, bringing the Joker into sharper relief. Simone’s use of the two villains helps push Barbara to the breaking point, and part of the success of this comic remains the focus on Barbara as a person who puts on a batsuit, rather than allowing the woman beneath the mask to become incidental. Either way, the stakes here could not be higher.

There are a number of impactful scenes, including James nearly taking on the Joker, a phone call from Dick Grayson to Barbara, and the showdown with the Gordon family. I did not expect the quality of this book to be so high, but in my opinion it rivals the main story. The art is this volume ranges from very good to amazing. This story is also important for “Birds of Prey” fans because it documents a huge change in direction for the Mary/Strix character. The art of Ed Benes and Daniel Sampere is wonderful in this arc.

My final thoughts on this are clear and simple. Many people believe Batgirl is not a dark book, but this volume proves that anytime the Joker is involved then you can rest assure that things are gonna get twisted! JQ gives this book a 9.5/10. Go and pick this up to see Gail Simone present Batgirl at her best! Volume 3 collects BATGIRL #14-19, BATGIRL ANNUAL #1 and BATMAN #17.