TPB Pick of the Week- Batman Beyond 2.0, Vol.2: Justice Lords Beyond

DC Comics proves that if you can’t continue producing a television series, the next best thing to do is keep it alive via the printed (or digital) page.

Volume 2 is especially amazing, because it concludes the Justice Lords arc, that started in the original Justice League show in the two part episode “A Better World”, so the nostalgia factor is pretty strong in this one. It doesn’t give you a definitive end for these characters, but it does offer a satisfying conclusion, after showing what happened to the original Justice League show. I have always been a fan of the Batman Beyond books for this factor.

On its own, this is still a great story, Wonder Woman is back and is hiding a dark secret. Meanwhile, Batman’s journey through the dystopian world of the Justice Lords takes a deadly turn. The Dark Knight of the future finds himself facing Lord Superman! If you’re a fan of books like Injustice, this one has a very similar tale In fact Injustice is largely inspired by the Justice Lords arc, so this would be interesting for fans of the Universe. Batman Beyond aka Terry McGinnis travels to the Justice Lord world to seek the help of Lord Batman to help fight the fascist Lord Superman. In his travels he meets finds his alternative self working the streets as a Joker and tries to save him off the street while fighting for their lives in this fascist world. 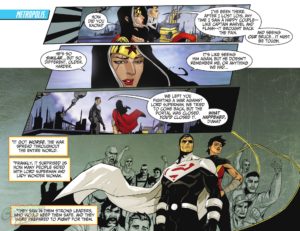 Kyle Higgins and Christos Gage do an incredible job of intermingling the Justice League of the future with the Justice Lords of a different and bleaker timeline. Thony Silas, Dexter Soy, and Mateo Guerrero admirably lend their drawing talents to bring the story to vivid and grim realization. It’s a volatile mixture which will capture the imagination of DC fans that grew up watching the “Batman Beyond” show either the first time around or in repeats.The art itself however is very solid, with a animation-esque style for the Batman Beyond series.

JQ gives this story a 8.8/10. I really enjoy Kyle Higgins work on this story.