TPB Pick of the Week- Batman: In Darkest Knight 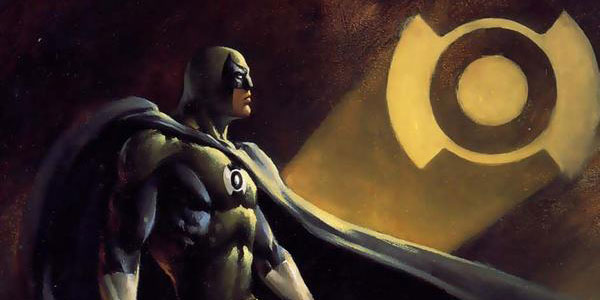 Tired of the on going stories and want a break from reality? Pick up an Elseworlds title. Take this 1994 book for example– Batman: In Darkest Knight offers a look at Earth-32 through the eyes of writer Mike Barr and art from Jerry Bingham.

The story begins with Bruce Wayne in a chair after a car accident. Bruce suddenly hears a voice that says “You have been chosen Bruce. You will have power to bring justice to this far-flung section of space.” Bruce then goes into his yard and sees a dying Green Lantern; our hero had been awaiting this since the night his parents died, and he becomes a Green Lantern, one of many, fighting injustice, on this planet and many others. The ring tells Bruce about his new abilities and what he must do to maintain the ring’s’ power. He then recites the Green Lanterns’ Oath, and swears never to betray it.  With the power to make enemies afraid, all Bruce now requires is the aspect– the ring is as strong as his will, and he can do anything he can think of.

Bruce is given the mission of finding a rouge Lantern, Sinestro, and they fight. Bruce captures Sinestro and brings him to the headquarters on Oa, where he begins to become aware of what he is a part of. Sinestro receives his punishment and is transported to the anti-matter universe of Qward where he is granted a Yellow ring, before escaping and heading to Gotham, where he causes many deaths. Sinestro then goes into hiding and cannot be found due to the Green Ring’s weakness to yellow.

By defying an order made by Ganthet, Bruce was ordered to surrender the ring immediately. Four Lanterns are sent to retrieve the ring, but while they are occupied fighting, Sinestro breaks into Bruce’s hideout and tampers with his Lantern so that the next time he charges his ring it will kill him. But he was unable to complete the job– Green Lanterns Superman, Flash, and Wonder Woman step in to stop him.

This story was AMAZING to read and I give it 9 out of 10!!! If you can track this story down I recommend asking your local comic shop or clicking the Amazon link on the page to get your copy!