TPB Pick of the Week- Batman: Earth One, Vol.2

Geoff Johns and Gary Frank take us back to Earth-One to witness Batman’s continuing journey. 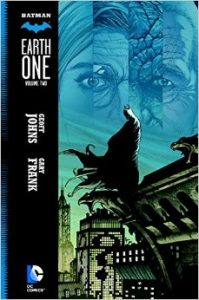 Batman as a character has been written in countless ways and different forms that it can get tiresome and off-putting. Somehow Geoff Johns (like he does with everything he touches) took Batman and sculpted him into a character that is “real” in the sense of a man who actually dons a costume to fight crime without the training background and criminal knowledge to immediately be successful at what he does. Sure, this representation of Batman sounds ridiculous and scary to longtime fans like me, but the scarier thing is IT TOTALLY WORKS!

This continuation of Bruce’s journey to be the hero that Gotham City needs and the cast of characters that help and support him on his lifelong mission takes place six months after Vol. 1, Batman must confront the vile Riddler, whose attacks threaten Gotham’s richest. To take him down Batman strengthens his alliance with Detective Gordon and reconnects with the brother-sister duo Jessica and Harvey Dent. He will also be lead to the sewers, where he meets one of the most monstrous creatures in his Rogue’s gallery; Killer Croc.

One of the things that makes Volume 2 an excellent read is its humor and self-aware attitude without being obnoxious or tongue-in-cheek about it. Both Alfred and Killer Croc mock the idea of fighting crime in a bat costume, and my absolute favorite part of the whole story is Gordon being flabbergasted by Batman’s need to put bats on absolutely everything he owns. It even pokes a little fun at the classic “bat-vanish,” where Batman seemingly disappears every time Gordon turns his back. 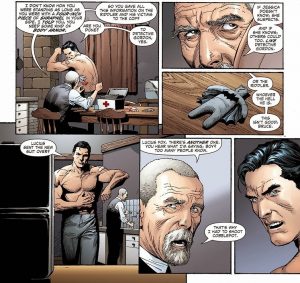 Volume 2 has many plot twists, which will keep you mesmerized on the story. Most of the twists and turns in this book relate to taking expectations readers have of certain characters, mainly villains, and turning them on their head. If you think you know what’s going to happen to certain characters because of your prior knowledge of Batman stories, you are in for some serious surprises.

Rumors are that Volume 3 is in the works and I cannot wait to see what Johns will write this time. JQ gives this book an 8.5 out of 10.