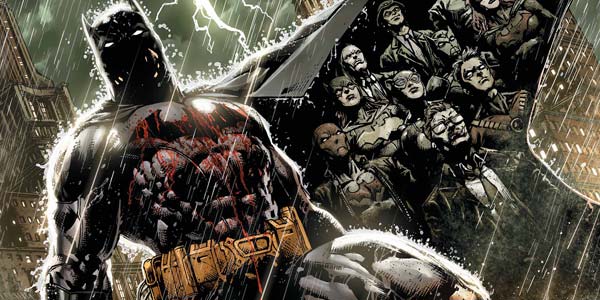 Since Forever Evil, the world looks at heroes in a different light; creating tension between Batman, his allies, and the Gotham City Police Department.

This volume of Batman Eternal collects the first half-a-year long epic that features many of DC’s top talent. The writing is managed by Scott Synder and James Tynion, who plan out the entire story, while the actual story beats are handled by other writers like Tim Seely, John Layman, Ray Fawkes, and later Kyle Higgins. The art is by an even more massive list with the various issues being drawn by Jason Fabok, Dustin Nguyen, Andy Clarke, and others.

The book brings in many familiar faces, as well as some New 52 debuts that should have been done years ago! You will get to see the story spread from Batman in Tokyo, Batgirl and Red Hood in South America, Batwing and Spectre in Arkham, and practically everything in-between. Some of the art is fantastic, particularly Jason Fabok’s who does the opening issues. Most artists try to add atmosphere to the different plot threads that all represent different parts of the Batman mythos.

The down side about all these things happening in this book is that the pacing is uneven. In some issues, the story moves fast and is just simply epic. Other issues feel like the series has to pump the breaks, and the story shows it, with very little momentum in the plot. The story threads are sometimes left hanging for several issues before being picked back up.  For example, Batwing’s story disappears for way to long!   Also some of returning characters that return aren’t really given great background explanations (if you are new to the New 52) so it’s impossible to known what of the old DC continuity stands, which is a problem that still haunts the New 52. Also with so many artists there are big shifts visually every few issues, and some don’t stand up to the work of others.

The overall mystery of the big bad in Batman Eternal is proving to be the biggest secret now in the DCU. This book is a grand undertaking that is easily the best of DC’s three weekly series. While the plot can be sluggish, big things still happen, and Batman’s universe is shaken up immensely. All while, we’re left still wondering WHO IS BEHIND IT ALL? This volume also is a great deal as you get 400 plus pages in a single book! I have been with this comic since day one and I do recommend it for ANY and ALL Batman fans!

If you are up to date on this story I would love to hear who you think the big bad of this story is. I have a theory but I will be wise and not spoil!