TPB Pick of the Week- Batman: Under the Red Hood 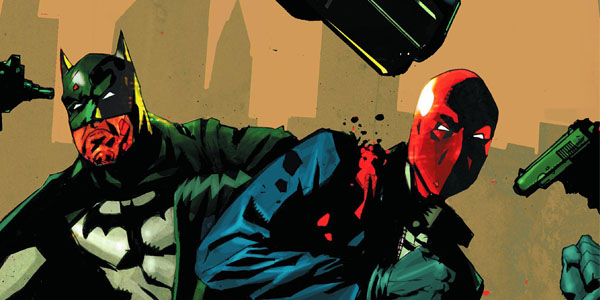 Can a character come back from the dead and be re-invented? Batman: Under the Red Hood answers that with a VENGEANCE!

One of the most widely-known stories in DC history is the Batman story Batman: Death in the Family. Featuring the death of the second Robin (Jason Todd), the story gave new depth to the seriousness of being Batman’s sidekick and a new level of menace to the character of The Joker. Jason Todd’s death was one of the few major character deaths that was never reversed. Until now, that is.

First and foremost, I wasn’t exactly broken up when the Joker murdered Jason Todd. I found him an extremely unlike-able Robin. So with that being said, I wasn’t so sure I would like this at all. However, I loved this! Jason Todd as the Red Hood is an extremely like-able character! All the qualities that made him an obnoxious Robin, worked for him in this story to be this anti heroes hero. I never thought I would see the day where I not only liked Jason Todd, but also felt for him and empathized with him.

This story is incredibly well written!! By the former Real World cast member Judd Winick. Fortunately, Judd Winick’s writing to be nothing short of exceptional. Given the circumstances of the set-up behind this story and the weird explanations behind the changes in the DC universe that were taking place at the time, it’s pretty significant that Winick was able to craft such a great story. This story took place shortly after the DC event Infinite Crisis in Batman #617-618, 635-641, 645-650, Batman Annual #25 (Pre Flashpoint/ New 52). The art team has some heavy hitters that put in some amazing work as well. Doug Manhke, Paul Lee, Shane Davis, Eric Battle, Tom Nguyen, Cam Smith, Rodney Ramos, Wayne Faucher, Lary Strucker, Mark Morales, Alex Sinclair, Matt Wagner, Jock, Shane Davis all make Winick’s story come to life!

There are a ton of panels to reference within this book some that were directly put into the animated feature. The scene with Joker, Batman and Jason goes down as one of my all time favorite moments ever!! Winick does a great job of writing this intense drama for the Dark knight, which shoves one of his greatest failures in his face. Judd is also great with characterization, dealing with the Batman, Red Hood, Alfred, Nightwing, Black Mask, the Joker, and their interactions together. The artwork is also top notch. This one is hard to put down as the writing and art just kept me engrossed in such a heart-breaking tale.

Though I still remain strongly against the notion of characters returning to life through ludicrous means, it’s hard not to make exceptions when really good stories featuring those formerly-deceased characters start to appear. Winick’s story of revenge, friendship and morality fires on all cylinders. It’s got mystery, drama and action, aplenty, and also features artwork by some of the best artists in DC’s stable. The massive book (nearly 400 pages) stands as one of the best Batman (or DC, in general) stories I have ever read, and I’d highly recommend it to any Batman fans. Yes, it’s that good! JQ gives this book 9/10.