IDW and DC Comics take us on an adventure of epic proportions as Batman and the Teenage Mutant Ninja Turtles team up. 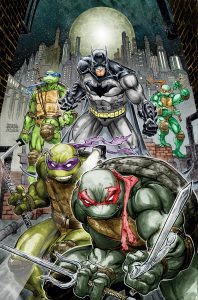 When I saw the concept of this book, I was sold– two of my childhood favorites meeting together in one series! The story is an interesting setup: The Turtles, Shredder, and the Foot Clan have all arrived in Gotham City somehow. We get the obligatory superhero misunderstanding fight, which was fantastic because who wouldn’t want to see Batman square off against the Turtles?

Batman and the Heroes in a Half-Shell sort out their issues and team up against Shredder. A good number of Batman villains make an appearance, but the team of Ra’s al Ghul and the League of Assassins with Shredder and the Foot was poetry in motion. We get most of the main characters from both franchise making at least a brief appearance, but the meat of the story is Batman, the Turtles, and Shredder. We even get a one-on-one Batman/Shredder fight!  I mean what else do I have to say?

The story wraps up too quickly and simply within the 6 issue arc. I feel like they could have gotten more out of the twist with the Batman villains towards the end than they did. The art was at times choppy but not horrible by any means. James Tynion IV, and Freddie Williams II are a pretty good team. You can tell both DC and IDW worked together to make a script that benefited both properties.

The Turtles are amusing as they try to figure out the guy in the Batman costume, and seeing the mutual respect they earn with each other, along with seeing Master Splinter in action, really made this story worthwhile. JQ gives this book a 8/10.