TPB Pick of the Week- Black Panther: A Nation Under Our Feet, Book One

With the hype behind the AMAZING trailer we saw for the Black Panther movie, this title was a good pick up to get into the character. 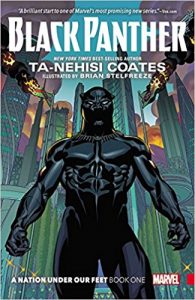 Wakanda is on the brink of coming apart at the seams, and there are evil forces afoot trying to spur a revolution. A mysterious woman, Zenzi, uses mind control unleash people’s rage. This results in an episode of violence that is the inciting incident for the story. But Zenzi isn’t working alone; she has a powerful ally named Tetu, who can control elements of nature.

Some background for those unfamiliar with this character for those who haven’t seen “Captain America: Civil War”, First, Wakanda is a fictional African nation. It’s quintessentially African with respect to culture, but it’s the most technologically advanced nation in the world. It achieved this first-world wealth in large part because it possesses most of the world’s vibranium (a much desired, but fictional, metal). Vibranium can absorb huge amounts of energy and only become stronger. The metal is most famously known for being the material from which Captain America’s shield was made, but it crops up in Marvel stories quite frequently.

Second, Black Panther is the protector of Wakanda and is the alter ego of the Wakandan king, T’Challa. This duality is particularly relevant in this story line. On the one hand, the Black Panther must battle Zenzi and Tetu who are working together to bring the nation down. On the other hand, as King, T’Challa is forced to recognize his responsibility for the health of the nation, and he must be a good leader and not just a good fighter. There are the makings of an inner battle that must be fought concurrently with the battle against the enemies of the state.

In addition to the main plot in which the hero fights to keep the nation from collapsing, there are a couple subplots. One involves an ex-member of the Royal Guard (the all-female Dora Milaje) using stolen technology to rescue her lover. The two go on a spree of rescuing Wakandans. Another subplot involves T-Challa’s sister being trapped in a limbo between life and death called the Djalia. 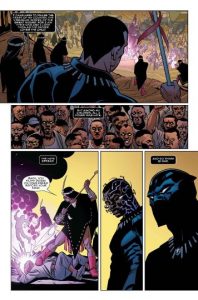 As would be expected from an award-winning author, this arc is well-written and sets up a fascinating story by Ta-Nehisi Coates. As this is a comic book, I should also talk about the artwork, which was done by Brian Stelfreeze. His art was clean and it was generally easy to tell what was going on in the frames, and the action seemed to be well conveyed.

JQ gives this book a 8 out of 10. There’s plenty of butt-kicking, but there’s also a thought-provoking tale of political intrigue.