TPB Pick of the Week- Captain America: Man Out of Time 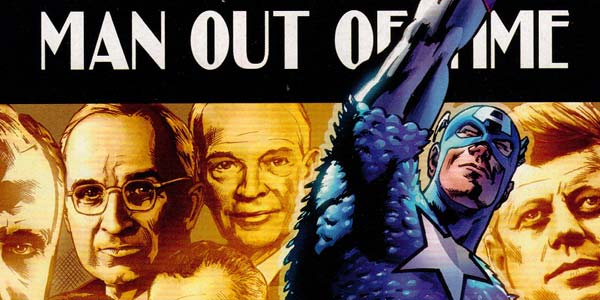 We need a hero in this day and age, and with all the drama out there today I figured that we could use some good old fashioned Captain America!

This story starts off fantastic, showing Steve and Bucky during WWII. Bucky is the real energetic guy, enjoying the limelight, while Steve, on the other hand, is a solemn soldier. He just wants to do his duty for his country. The attention he’s gained is unwanted by him, to the point that he semi disrespects the idea of Captain America in front of soldiers that idolize Cap. The Avengers find Cap frozen in ice and they revived him, and of course we get the obligatory scenes of Cap wandering around modern day and trying to adjust to all the modern technology and modern way of life. This is a story about how Captain America goes from a time when he is most useful/needed, to a time when there’s almost no need for him at all. This is a story about Cap’s unfreezing, and his awakening in the 21st Century. Everything has changed, and this story shows how he deals with the change.

Kang shows up and the Avengers fight him, he recognizes that Captain America is a man displaced in time and sends him back to his own time back to the day the Allies declared victory over Japan and the war was ended. At first he seems happy and goes about his daily life but soon he finds out that there is nothing left for him. His love is gone, most likely dead. Bucky is declared killed in action. And Cap really has no surviving relatives, plus he knows what the future holds so he realizes where he’s supposed to be. There are some really, really heartfelt moments, heartbreaking at some points. References to historical events were perfect, so were Steve’s reaction to finding out about them.

Using a piece of tech given to him by the Avengers, some quick thinking, and a little luck, Steve manages to hitch a ride back to our modern day and with his help, the Avengers wipe the floor with Kang and he is forced to retreat. Steve Rogers, (Captain America), stays in modern time and goes out to explore America and find himself.

Mark Waid does an amazing job with this story and he really hit home on many of the topics in this book. Jorge Molina’s art is good but this is one time where the story trumps the art in my opinion. JQ gives this book a 7.9/10.