Although his TPB drops later this month, I have read the whole series and was very impressed on how Brian Michael Bendis handled this.

Civil War II received mixed reviews from critics and readers from its high in June 2016 to its end in December. The repercussions of the storyline resulted in the new status quo of the Marvel Comic Universe. There was a lot to explain in this series, from Marvel NOW! to All New Marvel NOW! to All New All Different Marvel NOW!, to just NOW. It seems Marvel has been spinning the tires trying to find its identity on a common ground between the movies, television, and comics. Civil War II was slated at an attempt to capitalize on the title of Captain America 3, which comic book stores nationwide had issues explaining that the book had nothing to do with the movie because of the backlash from your nontraditional readers who love the movies but do not keep up with the comics.

Ulysses Cain is exposed to the Terrigen Mist cloud, which turns him into an Inhuman that has visions of the future. His visions depict events that affect most of our heroes in the Marvel Universe. Weeks later, the Inhumans help the Avengers defeat an invading Celestial Destroyer. Ulysses (still learning his powers) reveals to the Avengers that he foresaw the invasion, Iron Man has his doubts and tries to figure out the logic of stopping crimes before they occur and leaves in frustration. Weeks later, Captain Marvel leads a few of the Avengers to battle Thanos and it goes totally south as War Machine is killed and She-Hulk is mortally wounded. When Tony learns that they used Ulysses’ precognitive power to ambush Thanos, he vows to make sure that nobody uses it again. 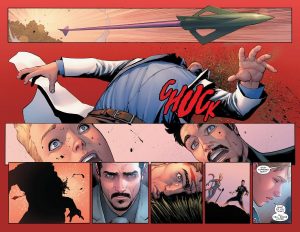 Iron Man then captures Ulysses to interrogate him and learn more about his abilities. This sends the Inhumans in a frenzy and Stark Tower is destroyed. After the Inhumans get Ulysses back his next vision is of the Hulk on a rampage which sends Captain Marvel and her team to Bruce Banner’s laboratory for his arrest. Bruce steps outside surrounded and this makes him angry and he is shot dead with an arrow from the trees. Hawkeye is immediately arrested on site without any fight. Hawkeye is later acquitted for this act as he was acting on Banners wishes which are shown in his last will and testaments. Meanwhile, Iron Man’s test on Ulysses prove that his powers are based on high probability and are not absolute truth. Not wanting to hear what Tony Stark has to say Captain Marvel literally calls in the calvary of the Ultimates, Storm’s X-Men, Alpha Flight, and the Guardians of the Galaxy to show Tony she is not backing down. Iron Man along with the Avengers and Magneto’s X-Men team are severely outnumbered and are teleported out by Doctor Strange as a battle starts.

After some more vivid visions from Ulysses one showing Miles Morales killing Steve Rodgers and one of the dystopian future from Old Man Logan, Captain Marvel shows up to arrest Miles. Iron Man intercepts and attacks Captain Marvel. Medusa warns the other heroes of Ulysses’ vision and they try in vain to stop the fight. After Captain Marvel delivers a seemingly fatal blow to Iron Man, Ulysses has multiple visions of possible futures (setting up new arcs for the future of the Marvel Universe). Ulysses is then approached by Eternity and takes a place at his side as a new cosmic god. Later, Captain Marvel meets with the President and is offered unlimited resources to lead the superhero community into the future.

There was a lot to soak in with this if you are new to comics. Brian Michael Bendis did a fantastic job here and the art team lead by David Marquez was awesome as well. John Dell did some of the inking for this story and his additions really made some of the pages pop!  JQ gives Civil War II a 7/10 in total.