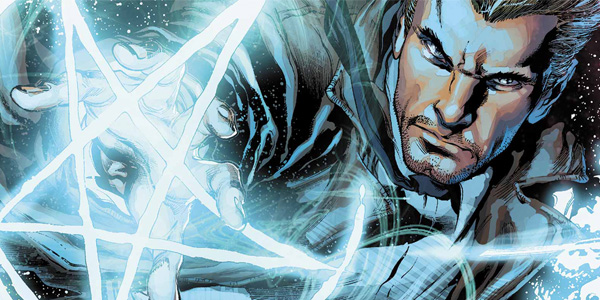 With the new show on NBC getting off to a great start why not get acquainted with his comic book counterpart.

The star of Justice League Dark and Hellblazer (the longest-running Vertigo series) is unleashed in his own New 52 DCU title! The collection offers the first six issues of the series, led off by a three-issue arc that explores Constantine’s present world. This arc is written by Jeff Lemire and Ray Fawkes, I guess as a sort of handoff from Justice League Dark that Jeff Lemire has been doing. Renato Guede is at the helm with the art and he does a very good job as well.

Constantine is a liar, cheater, manipulator, and yet he uses these skills and more to protect the world from the darkest corners of the DC Universe. The new John Constantine is the old John Constantine. Mostly. The New 52 Constantine is ten years or so younger than the Vertigo Hellblazer version, and has a romantic history with Zatanna. Even though this a sorta reboot he has a lot of the same history as the original.

Constantine is portrayed as a supernatural Indiana Jones, globetrotting ahead of his evil magic rivals to collect the pieces of the powerful talisman known as Croydon’s Compass, a device that alerts its owner to the appearance of any mystical object first. As he travels to Norway, Myanmar and London, he’s chased by Sargon the Sorceress (daughter of Sargon the Sorcerer -Some of you Golden Age readers will get that nod), Mister E, and encounters other spooky characters like Papa Midnite, and the Spectre along the way too.

I enjoyed this read and normally I stay away from the supernatural comics. Since reading this book I have picked up a few of the older stories from the comic shop to read and realized that I have been missing out. JQ gives New 52 Constantine Vol 1 a 7.9/10.