A must have collectible for any fans of DC comics. This omnibus collects the entirety of the DC Rebirth, that includes the Rebirth Special and all the one shots of the initial reboot. 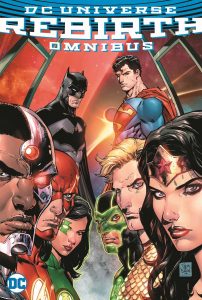 This event set sets the stage for the original Wally West’s return to DC continuity as well as a plot that other DC world’s continuity (AKA New 52) was tampered with by an outside source. Not only is Rebirth’s story issues collected, however, but the omnibus contains each of the single issue Rebirth stories for much of the big relaunched titles like Batman, Superman, and Wonder Woman. This is huge seeing that most of these books are hard to come by for those who want to read them.

Some titles are arguably stronger than others. Where as titles like Superman, you’ll need to have read Final Days of Superman and Superman: Lois and Clark to fully understand it. Likewise, Titans looks to be a fun new title though you’ll want to have read Titan Hunt to see how the original Teen Titans reconnected with one another prior to Wally West’s return. Wonder Woman’s issue is easily my favorite as the book acknowledges the continuity discrepancies between her previous origin stories and her rebooted “daughter of Zeus” origin story introduced in the New 52. Red Hood’s new title surprised me in how intriguing it was, while I’m also glad to see that Rebirth is returning the New 52 Helena Bertellini to her Huntress roots instead of keeping her as Matron, the super spy from the same group as Dick Grayson. Then there were a few that kept on trucking through the New 52 and realigned flawlessly ( Green Lanterns and Hal Jordan and the Green Lantern Corps).

There were a few titles that slipped through my fingers in the initial Rebirth that I was able to read in this Omnibus and that I now kick myself for missing. This Omnibus features contributions from some of the industry’s best writers, including Geoff Johns, Scott Snyder, Tom King, Peter J. Tomasi and Greg Rucka, and its most talented artists, such as Gary Frank, Ethan Van Sciver, Ivan Reis, Phil Jimenez, Mikel Janin, Doug Mahnke and Yanick Paquette.

There is a reason why DC’s sales went up during this event. Read a few and you will agree that any of the DC’s Rebirth titles are amazing reads! JQ gives this a 9/10.