TPB Pick of the Week: DC vs. Marvel Comics 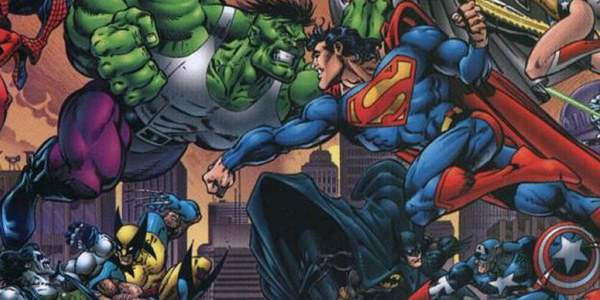 Ever thought if Coke and Pepsi got together and let consumers decide who would win in a fight what would happen?

Well in 1996 that’s what DC and Marvel did for their fans. This story written by Ron Marz and Peter David. Featured Art from various major talent from both stables. What happens when the two biggest comic book publishers, decide to write an epic story in which their legendary characters would not only interact and battle, but the fans would decide who would win those wars. See who comes out on top when Superman takes on the Hulk, Spider-Man goes up against Superboy, Batman fights Captain America, Wolverine battles Lobo, Wonder Woman faces off against Storm, and the Silver Surfer brawls with Green Lantern. We have seen these battle threads on various websites, and they go all over the place. This ended up just like one of those threads with the “popular” vote going to the winner.

The idea is great and the artwork is AMAZING (and very Marvel-esque), but overall I have to say that this is much too small a format for such a sprawling concept. In order to cram everything in, what should be epic confrontations are mashed the smallest possible space. Still enjoyable none the less! On the JQ scale this gets an over all 7.5/10. You can find this on Amazon just click the link!!