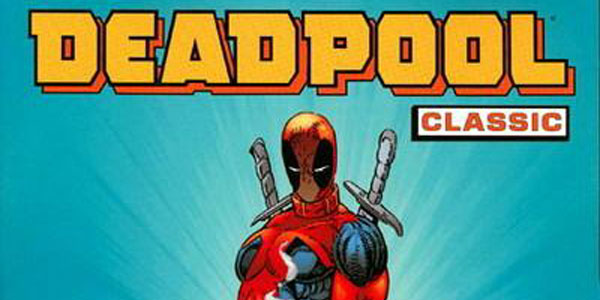 With all the hype that the movie is generating (not that Deadpool needs any more) I thought why not go DEEP into the start of the character that 90% of the Marvel comic world loves?

This is the beginning of Deadpool, the wisecracking merc with a mouth. If you have never seen these issues then you will quickly learn that modern Deadpool is different than the character that was originally shown in these comics. This version is a more moody and brooding… the Deadpool of now is funny, always making jokes… though both versions are equally deadly and just a bit crazy. It was cool to see how Wade Wilson got his start in the Marvel universe, and seeing him drawn in the 90’s style.

In the first volume of this collection, the Merc-with-the-Mouth makes his debut in NEW MUTANTS #98 as an assassin sent by some guy named Mr. Tolliver (it’s never really explained who he is) to assassinate Cable. What’s notable about this first issue is that it was written by Fabian Nicieza, and illustrated by the king of 90’s artwork himself, Rob Liefeld. So while the story suffers from some plot holes (it never bothers to explain who Tolliver is, or this weird mutant named Gideon who appears at the beginning) and is dominated by Liefeldian artwork, Deadpool himself is still fairly entertaining as he does have some sense of humor, but not to the extent he would in later stories. Also in this volume are writers Joe Kelly, and Mark Waid, along with the art talents of Joe Madureira, and Ian Churchill.

The second story presented takes place in the four issue limited series DEADPOOL: THE CIRCLE CHASE, where Deadpool’s former boss Mr. Tolliver promises control over an “ultimate weapon” to one of his assassins in his will. This leads the mercenary and his partner Weasel search for the mysterious weapon while simultaneously fighting off other subordinates of Tolliver’s who seek its contents. Later in DEADPOOL #1-4, the merc with the mouth faces long time X-Men villains Black Tom Cassidy and Juggernaut with the aid of Banshee and his daughter, and finally in the first issue of his first ongoing monthly series, proves that even a wise-cracking, trigger-happy assassin like himself is bound by some degree of principle.

In the end, if you are new to the Deadpool character (or want to get to know him better) this book is a great way to start. You get a taste of Deadpool as a charatcer, and there’s actually quite a bit of character development compared to the newer takes of the character. JQ gives this book a 7.8/10 but mini series gets a 9/10!