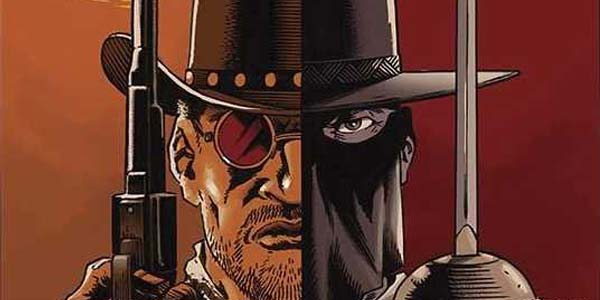 If you’ve seen the movie Django Unchained and liked it, you’ll love Django’s continuing adventure as he meets up with Zorro.

Quentin Tarantino teamed up with the writers and illustrators at Dynamite Entertainment to create a series of comics, compiled here in graphic novel form, set several years after the events of Django Unchained, with Django again pursuing evil men in his role as a bounty hunter. Taking to the roads of the American Southwest, he encounters the aged and sophisticated Diego de la Vega (aka Zorro) by sheer chance. Django is fascinated by this unusual character, the first wealthy white man he’s met who seems totally unconcerned with the color of his skin and who can hold his own in a fight. Django is hired on as Diego’s bodyguard, and is soon drawn into a fight to free the local indigenous people from brutal servitude. Learning much from the older man (as he did from Schultz), he discovers that slavery isn’t exclusive to his people, as he even dons the mask of Zorro in their mission of mercy!

Zorro is interested in the fraud perpetrated by the self-appointed Archduke of Arizona, who Django soon discovers isn’t much different from the slave owners he knew back in the South, and the duo begin to form a bit of a rebellion.

I loved the way Tarantino and his collaborators emphasize the differences between Django and Zorro (class, choice of weapons, their readiness to kill) while using their contrasting styles to work together. Fans will love the additional material included in this edition: new cover art, commentaries from Tarantino and collaborator Matt Wagner, as well as the original script from the first comic.

I doubt there are plans to make this into a movie, but Django/ Zorro stands on its own as a worthy sequel to Django Unchained. JQ gives this book a 8.9/10.