With all the critics bashing the new Netflix Iron Fist show, I thought maybe shedding some light on Danny Rand’s origin may help soften the millennial outbursts on a classic character.

The 1960s and `70s were a simpler time in comic book writing and art, and much less complicated than the stories of today. Having read quite a few of these Essentials volumes over the past couple of years, I can confidently say that this is the easiest way for new readers to gain access to key issues that are too expensive to some people to purchase. The Essentials also let fans of a character relive the old days of comics.

The story of the Iron Fist is a story about Danny Rand. As a young boy, Rand was hiking in the Himalayas with his parents and a family friend in search of the mythical kingdom of K’un-Lun. The friend turned out to actually be an enemy, and his betrayal would cost Rand’s parents their lives. Danny, however, survived and made it to K’un-Lun where he was trained in the martial arts. A special quest would result in his obtaining the power of the Iron Fist, which allowed him to focus energy into his fist and make it super-strong. There were other benefits to this power (including self-healing), but he could only use this energy sporadically.

Rand returns to New York City seeking revenge against the man who betrayed his family, but finds that it is not easy to achieve. Even as that plot line is resolved, he finds new adversaries, probably none as formidable as Khan. Along the way, he gets allies and friends, notably Colleen Wing and Misty Knight who together form a security company; Misty and Danny also have an evolving romantic interest. Of course, the most notable friend would be Luke Cage, who is only introduced at the end of this volume. Together, the two will become Power Man and Iron Fist, Heroes for Hire. 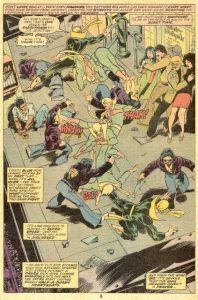 The strength of this Essentials edition is clearly due to the writer and artist who were responsible for most of the issues within: respectively Chris Claremont and John Byrne. Claremont is a great writer. Byrne, on this book, reaffirms why his art is top-notch. It is not merely the way he illustrates people but his wonderful depiction of action that makes Byrne great. This duo is an awesome 1-2 punch that usually spells win for all readers.

Definitely, take the time to read up on the character before jumping on the bash wagon for the Netflix series. It may not be the strongest of the up and coming Defenders team up but it is pretty straight with the origin story. JQ gives this Essential an 8 out of 10.