TPB Pick of the Week- Fly: The Fall

I did a review on the first volume of FLY a few years back and this second volume was just as fantastic. It was short but sweet and hit an emotional high note towards the end.

Fly is about drug addiction, but instead of boring regular drugs this one lets you fly amd grants you other powers. We join back with a few familiar characters from volume one. Eddie still finds himself in trouble and this time has a psycho girlfriend after him who wants the drug. While his friend, Francis, took over his dad’s empire and is one of the richest men in the world. In The Fall, Eddie finally escapes his wife, but his now haunted by his current girlfriend’s past. We find out the identity of the guy who burned down Francis’ parent’s home in the first volume, and most of what was left open in the earlier story is wrapped up.

The same clever writing again from Raven Gregory and great art from Robert Gill helped keep this book up to par with the earlier volume. The Fall feels a bit less relatable than the first one, but it’s still great. There is a lot more use of “super powers” in this volume. Eddie’s life feels like it’s hit rock bottom and Francis ends up becoming a person we thought he wouldn’t. Their lifetime friendship is put to the test including a setup that Francis puts Eddie through. Francis is a smart guy and it turns out he’s sick in the head as well. Revenge can turn a good person into something evil, especially if it’s been eating away at them since childhood. 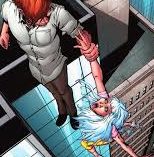 The Fall is pretty gory this time around, even more so than the first volume. There’s more violence and things just go from bad to worse quickly this time around and you really feel it. There’s tension in the air between all the characters and the final issue just lets all that explode.

JQ gives Fly: The Fall a 7.8/10. Fly is an amazing series and any fan who wants a sense of realism should pick this up. Of course you should read the first, but the second doesn’t disappoint and has a satisfying ending.