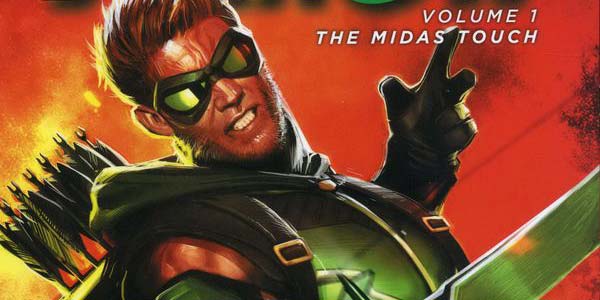 The Emerald Archer returns, relaunched in the New 52 style for a new generation of readers.

The masked vigilante Green Arrow is used to looking for trouble, but now trouble’s come looking for him! Enter this new villain named Rush and his gang of thrill-seeking trust fund babies, who are buying their super powers. Along with their rotting man-monster Midas and the assassin Blood Rose, Rush plans to kill a super hero live on the Internet. Even with his cutting-edge weapons and tech from Q-Core, the odds are stacked against Green Arrow!

As far as comic stories go, Green Arrow, Volume 1 is average. Oliver Queen and Green Arrow are likeable enough, but too much of his character seems copied from more updated versions of Batman. Green Arrow and Batman share somewhat similar backgrounds, but the characters are not alike. The similarities between Oliver Queen/Green Arrow and Bruce Wayne/Batman are too numerous in this volume and take away from the overall character of Green Arrow.

With the TV show so popular, Green Arrow stuff is a hot item, but fans of the show will most likely not like this book. For fans of the show I would recommend Mike Grell’s Long Bow Hunter run. As for this book I give it a 6/10 on the JQ scale.