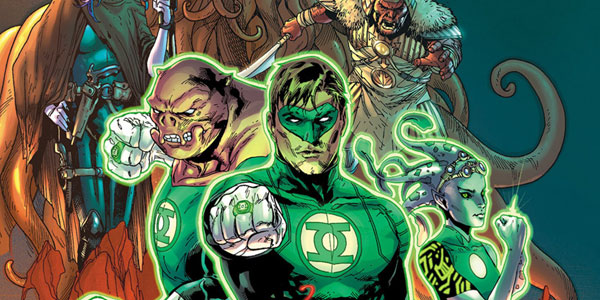 Can the Green Lantern Corps survive yet ANOTHER curve ball tossed their way?  “Test of Wills” will help explain that.

Since Robert Venditti took control of Green Lantern there have been some major changes to the GL Corps. They are now headquartered on Mogo. Their numbers are greatly depleted and most GL members are relatively new and have little training… and many refuse to use their rings for fear of ushering in the end of the universe too quickly.

Hal is now the leader of the Corps, now that all of the Guardians are gone, and he has a new mandate for the Corps. In addition to their regular policing duties in each of their sectors, Hal wants then Corps to limit the use of emotional-spectrum and light-based weapons by other beings in the universe. Also, as if this new policy didn’t do enough to put the Corps on the outs with all of the other light corps groups throughout the universe, a shape shifting impostor discredited the entire Corps by making inflammatory comments in the guise of Hal Jordan. This has brought the Corps under fire (literally) throughout the universe and has cost the lives of many more GL members. Clearly, Hal has his work cut out for him in his new role as leader and it will be an uphill battle for many years to come.

I’m not entirely pleased with the new direction that Venditti is steering this boat, but I’m willing to go along for the ride. Green Lantern is one of my  favorite character in the DC universe (aside from Batman), and this new trail isn’t going to do much to change that. Venditti has laid down many plot threads with problems both big and small, and there’s so much going on in this book that at times I felt like it was over-complicated. I’ve said enough about the plot, already, so I won’t spend more time going into the many little side stories contained in this book. However, I will mention that this book introduces one new character to the New 52 universe: Kara Zor-El. Yep. She’s finally here! And she’s… a Red Lantern? What?!

Billy Tan, Bernard Chang and the rest of the bunch do a great job on artwork. Sure, I miss the days of Patrick Gleason and Doug Mahnke, but these guys are worthy successors who still hold the book to a very high standard of quality.

If you are a GL fan, you’ll probably want to pick this book up and see just where the Corps is headed and who the new main “underlings” are. Also, long-time fans of the book will be happy to see that another fan favorite and probably the most powerful GL of all time is also making a reappearance in this book! It’s a decent book and definitely worth a look. VOLUME 5 collects Green Lantern #27-34 and Green Lantern Corps #31-33. JQ gives it a 7.5/10.