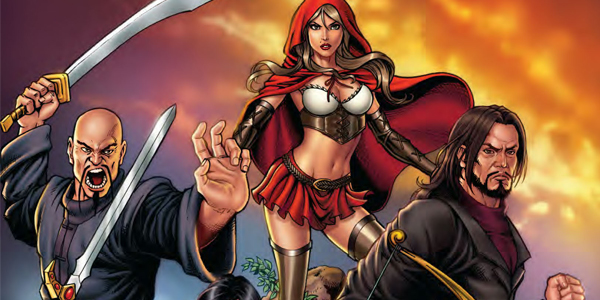 Zenoscope brings to us their version of a superhero JLA or Avengers team with the Realm Knights.

The government decides to reform the “Realm Knights”, bringing together six people who do not necessarily wish to be in the same room with one another. Here the characters, we have Sela Mathers (Snow White), Robyn Hood (Robin Hood), Red Riding Hood, Captain Hook, Van Helsing and of course characters from Greek Mythology. From what I saw in the drawings and some of the conversations is that they are different from their original stories, but that is to be expected from this universe as all the characters are twist from the originals, it lacked a bit of more character development and background story as to know who they are and their true intentions in the story as it progresses on. If you follow most of these characters adventures in the solo books then you will have an idea already of who and why they do what they do. 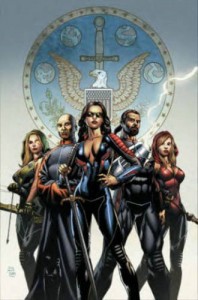 Now for the story. As Robyn notes at the outset, the plot is basically a MacGuffin Hunt. The Highborns, (traditional Grimm badguys and basically the old Olympian Gods), were in possession of various weapons of power that were recovered by the U.S. Government. Now, Cronus, (the Titan, father of the Olympian Gods, who was consigned by them to Tartarus), is seeking out and retaking those items. The Realm Knights are assigned to stop him. First up is a trip to the Underworld to recover a scythe. We meet up with Hades, see his father and son reunion with Cronus, and from there the adventure takes off in earnest. As an aside, it is interesting that Hades is portrayed as a wise-cracking playboy, which is a refreshing change in bad guy terms.

The drawings were cool, even if weird sometimes. This volume collects the four issues in Zenescope’s Realm Knights mini-series, (and a one-shot prequel).  Zenoscope has made a special effort to make this Volume accessible to newer readers. Rather than just lumping everyone together right away with a lot of dialogue about people and events that a new reader wouldn’t recognize.