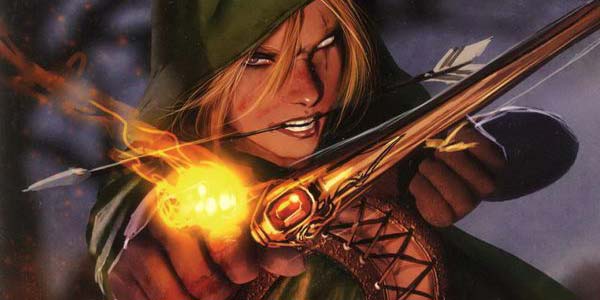 Zenescope hits the bullseye with their take on this classic tale… Step outside of the box and take a look at Robyn Hood.

In the land of Myst, a tyrant rules the city of Bree with an iron fist, leaving its citizens living in fear and terror. But all hope is not lost as a young orphan girl from another world discovers her destiny and becomes the legend she was meant to be

I love the twist on Robyn Hood in this story. Trust me when I say this is NOT your Kevin Costner version of Robin. As you can tell from most of Zenescope’s stories, Robin is not a man, but is now Robyn and she is not all sparkles and light.  The basic elements of the original story are still there– Robyn steals from the rich to benefit the poor, she stands up to injustice and evil royalty. She just does it much `differently’. I really liked her as a character though. She wasn’t just a scantly clad chick with a bow and arrow… she is broken, but not weak. There is a lot of bouncing between dimensions and with that they were able to keep it modern and classic at the same time.

That brings me to the artwork. I love the detail, not just in the characters and scenery but in the color as well. They all pull together and the frames really come alive on the page. I think that’s why I like outfits so much.  Yes they tend to veer to the skimpy, but there are also little details that catch the eye. You can tell there was a lot of time put into the artwork it wasn’t just slapped on the page.

On a side note, this novel is VERY graphic, with blood, violence, and the like. There are also some very adult situations, and while you don’t see certain things, there are heavy themes in the book. So please don’t just think `Ooooh shiny cover!’ and hand it to a kid, just because it has pictures. This book’s popularity has skyrocketed after three mini series and two one shots, and Zenoscope has now started her own monthly ongoing book. Besides the regularly published Grimm Fairy Tales book, only Wonderland has seen its own monthly title and MANY spin offs. JQ gives Robyn Hood a 7.8/10.