Peter Quill has abandoned the Guardians and his role as Star-Lord to be Emperor of the Spartax. All hell breaks loose as the events from Secret Wars backlashes into continuity. 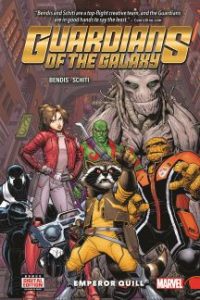 Brian Michael Bendis has been writing GOTG for a few years now, but this is the post-Secret-War relaunch. Peter Quill has become the King of Spartax, Kitty Pryde has taken on the Star-Lord mantle, and the Thing from the Fantastic Four has joined the Guardians.Tragically, despite all these mix-ups, Bendis still hasn’t found his footing with this series. It’s a fun ride the whole way through but it’s all ultimately shallow and forgettable.

The biggest issue here is the story. This entire arc revolves around the Guardians brawling it out with two powerful villains that want revenge against them. That’s really it! The first villain shows up, they brawl until the Guardians win, then the second villain shows up, and they brawl until the Guardians win. You would think that with two villains in one arc, Bendis might do something a little more interesting. Worse, these two villains are actually carried over from Bendis’ even-more-mediocre, “Guardians of Knowhere” (aka “what were the Guardians up to during Secret Wars”) but I have no idea why Bendis felt the need to continue with these villains. They were just as shallow in Guardians of Knowhere so their continued presence here only hammers home how dull they are. Both of these characters could have been dealt with in 1 or 2 issues but Bendis has dragged these slugfests out over 9 issues!

An alarming number of the pages in this book have no dialog at all! I would be fine with this if the action was great but that, too, is incredibly generic. Valerio Schiti does a pretty decent job here with the pencils so that is one saving grace. There are lots of explosions and the large roster of characters is used well but it ALWAYS resorts to being a huge fight. Also, as you would probably expect, the characters constantly banter between one another (like in past installments) but it’s never particularly witty or funny. As many have pointed out, the Guardians here have been dumbed down here to match their movie counterparts more closely but we’ve wound up with amalgamations that are much less likable than either the comics or the movies. Star Lord is an arrogant jerk, Rocket is nuts, Drax is stupid, etc. The Thing is actually pretty likable here so I’d praise his addition. That said, I have to criticize the other shakeups and how completely pointless they turn out to be. Kitty is Star-Lord and Peter becomes King… for ONE ISSUE before the Guardians go get Peter again. What was the point of those shake-ups when you negated them after one issue? We’re back to business as usual almost immediately and that is a huge disappointment. 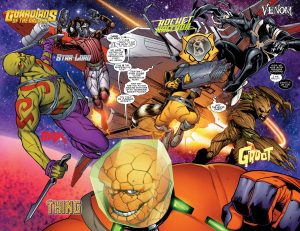 This book was a fun but forgettable read for me. There are lots of explosions, the roster of characters keeps rotating, and things move at a quick pace. It’s all enjoyable to read but it never transcends past the aforementioned explosions and superhero banter. It never delves deeper with any of these characters and the shallow, simplistic storytelling. I normally like Bendis’s work so I was bummed not to fully enjoy this.