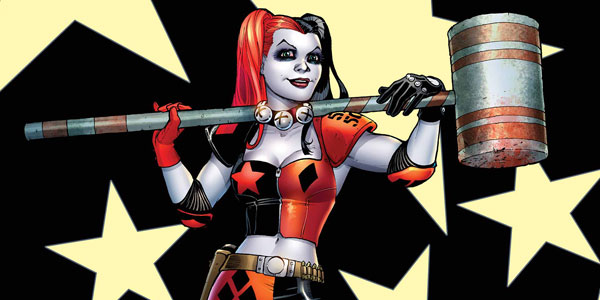 Let’s face it– the New 52 was very serious in tone, art, and content. How did DC try to fix this?  They gave us Harley Quinn, but a different version than seen in Suicide Squad and the Batman titles. Instead we got a Deadpool-ish version of Harley and it worked. 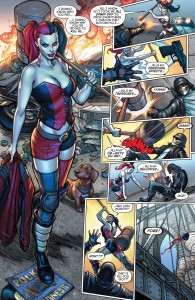 Looking at DC objectively, they needed a few things: 1) A female character series to at least attempt to balance out the overwhelmingly male centric titles, and 2) A fun character. So it makes perfect sense to give Harley Quinn her own series as she ticks both of those boxes.

This novel collects issues 0-8 of the Harley Quinn series. There are a ton of famous industry artists that lend a hand to this book. Issue 0 had the likes of Darwyn Cooke, Sam Kieth, Becky Cloonan, Bruce Timm Tony S. Daniel, Paul Pope, Walter Simonson and Art Baltazar. We start with Harley’s sitting in her storage locker, reading comics and eating junk food before going into a sugar coma where she imagines herself as different things – a rock star, a ninja, a giant robot, etc. with each page being drawn by one of these amazing artists. The main artist on this title is Chad Hardin, with the co-writer of the series, Amanda Conner, contributing pages too. Suffice it to say this is a great looking comic and, with Harley breaking the fourth wall a-la Deadpool, it’s really fun too.

From then we get the setup of the series: a former patient of Harley’s at Arkham Asylum has passed away and left her his four story building in Coney Island. Harley, as new owner, is to be the landlord to a group of misfits who (of course) run a murderer’s museum on the ground floor of the building and a weird avant-garde/ violent stage show. She also takes a job as a psychiatrist to help stay afloat and joins a roller derby team because, well, a gal’s gotta have a hobby and she’s pretty much the ultimate roller derby chick already! Oh and someone’s put a hit out on her so she’s got assassins on her tail too, and somewhere in there is a talking dead beaver only she can hear (it’s surprising to find a dearth of “stuffed beaver” jokes made).

There is a lot going on in this book but that is what makes it kinda brilliant. Harley is flippin crazy! So why wouldn’t it be all over the place?

The first couple of issues are fun and over the top as Harley meets her new cast of supporting characters and her old buddy (and ambiguous “partner”) Poison Ivy shows up to help her liberate an animal shelter, moving them into Harley’s new pad. There’s a lot of cameos from Harley’s past, mentions of past story lines, pop culture references up the wahzoo and lots of 4th wall breaks. 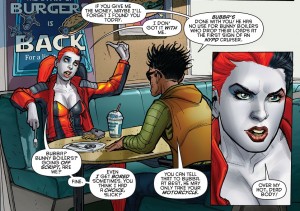 All in all this was a very enjoyable book – well written, and chaotically creative, with delightful art… this Harley Quinn is awesome! JQ gives this book a 8.9/10.