Is it possible for Harley to go even more insane?! Well, Harley Quinn Vol.3 pushes that envelope. 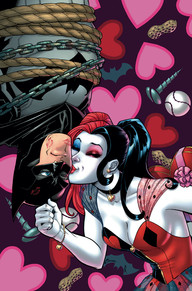 Harley Quinn is so popular that DC put out almost as many specials as it does normal issues of the series. Case in point, this volume collects 3 actual issues of the series, and then an Annual, a Christmas Special, and a Valentine’s Day Special too. While the stories included were pretty good, I especially enjoyed the win a date with Bruce Wayne story. I wasn’t sure how I felt about this at first. There was no denying that the stories were still entertaining, but did I really want to read about a villain shopping for pet food and trying to balance their work, social, and personal life? But the more I thought about it, the more I liked the idea. We’re human beings living somewhat mundane lives ourselves, and sometimes it’s exciting to see a superhero or villain and know they still have to go through life like the rest of us. The only story I’d say I didn’t much appreciate was the last bit where Harley is hiring help for her overcrowded days (Harley and her gang of Harleys). It was an interesting concept, but I hate that the whole story wasn’t included in the collection for ones that missed the individual issues.

The Annual is all one story in which Harley breaks into Arkham to rescue Poison Ivy, but ends up drugged and trapped in different dream sequences, which use loads of guest artists. It does introduce a new supporting character for the main book though. The Christmas and Valentine’s Day Specials are more broken down, with lead stories and then some backup stuff, but again, they’re not really that important. The Christmas story is almost insufferably annoying, whilst the New Year’s back-up is a little funnier. The Valentine’s Day one is more one-note and has a Batman cameo which actually works rather than being gratuitous. 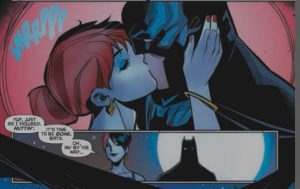 The three issues of Harley’s main series serve to show how much she’s juggling at the moment, with her job, her apartment building and its tenants, her roller derby team, and her potential boyfriend Mason Macabre too. It all builds up to a climax which makes sense and has a lot of story potential but of course, that’s where this volume ends.

I thought the artwork was rather beautiful. There is a lot to take in as multiple artists are seen in this volume. They all did a phenomenal job in each of their sections. Amanda Conner, Jimmy Palmiotti, and crew continue to try and make Harley DC’s version of Marvel’s Deadpool.

JQ gives this TPB a 6.5/10. I enjoyed the stories, however, for a first-time reader it may be not the right way to continue a volume for people who only read TPBs.