TPB Pick of the Week- Hawkeye VOL.1: My Life as a Weapon 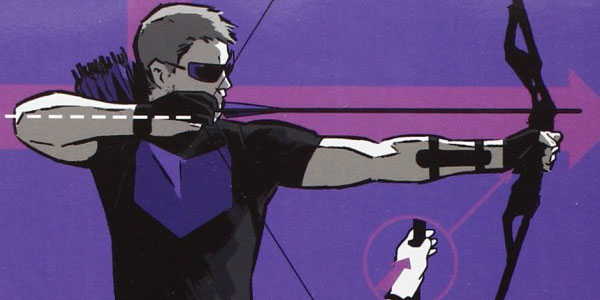 Thanks to the Avengers movies (and Jeremy Renner) Hawkeye became interesting to me. So how’s his comic?

I knew of Hawkeye from the Silver Age Avengers, and had enjoyed Jeremy Renner’s portrayal in the new Marvel films.  But what drew me to Hawkeye’s comic series was the creative team of Matt Fraction and David Aja, as I have heard nothing but awesome things about them from fellow comic book fans.  Matt Fraction writes witty, charming, cerebral characters, and David Aja produces some of the most stunning, kinetic actions scenes these eyes have ever seen. That this was going to be a great series with them behind it was a given, but I was in no way prepared to be blown away like I was.

One of the things that makes this book stand out is that fact that it takes place on the days that Clint Barton ISN’T being a superhero (CRAZY CONCEPT RIGHT???).  When he isn’t saving the world from super-villains and shadowy organizations bent on world domination Clint is making sure his neighbors aren’t evicted, and helping damsels in distress, to hilarious effect. The tone of the series is one of pure fun, and that is what makes the series so special. In a time where labels like ‘Epic’, ‘Gritty’, and ‘Events’ rule comics, Hawkeye reminds us that sometimes its okay to open a book for nothing more than a smile, a boat load of laughs, and an all around good time.

What makes this book relevant to current times now is the fact that this was a pretty major plot point in the Avengers 2, that Hawkeye is a normal guy outside of the Avengers. The book is light, breezy, fits well into actual save-the-world Avengers continuity but requires no knowledge or caring about such things, and is gorgeous to look at. With ex-Young Avenger Kate Bishop by his side, Hawkeye is out to prove himself as one of Earth’s Mightiest Heroes.  In this story, S.H.I.E.L.D. recruits Clint to intercept a packet of incriminating evidence before he becomes the most wanted man in the world.