TPB Pick of the Week- Hellboy Vol.1: Seed of Destruction

With the news that Mike Mignola is retiring Hellboy after the latest issue that came out this past week, I decided to go to the stacks and re read where it all began.

If you have never read a Hellboy comic, Seed of Destruction is a great place to start. You get easily introduced to Hellboy and what he’s about here, and the drift into Hellboy-reality is very natural and gentle. Besides from that it’s a very nice read as a stand-alone story. It doesn’t end with something like a cliff-hanger that makes you need to buy continuing books. It’s a book with a beginning and an end.

It’s been over 35 years since Trevor Bruttenholm first found the creature that was later named “Hellboy”, a big red creature over 7 feet high, strong as ten men, with a tail and an artificial stone arm. Nobody knows what he is or where he came from, including himself (a thing about which you get more and more hints as time goes by, not only in this particular volume). That was at the end of World War II on the scene of an occult experiment by a Nazi group trying to grab on to probably their last chances of empowering the Reich. Now, the present, Trevor reaches out to Hellboy, who has since gone on to work for the “Bureau of Paranormal Investigation”, because he desperately needs his aid. Weird murders are taking place and it’s up to Hellboy and his agency to find what kind of mystical powers are on a rampage and, even more important, who unleashed them.

What you have here is a title that people who like things like “X-Files” will like a lot. It’s about an agency that goes around the world to solve super-natural crimes and puzzles, but the members of the agency aren’t that normal either. All this in a pretty gritty and dark atmosphere. It’s very well-written, everything fits, and what also is really nice is that the creator (Mike Mignola) NEVER gave the story-writing or the art-job away in any of the following books. The creator sticks with his book and it really shows later on, when you see how things keep clicking and keep the same atmosphere. Mignola’s art has always been unique and amazing. It translates so well with this title. John Byrne also helms the art here. 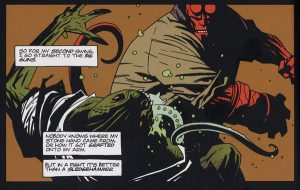 It is sad to hear that Hellboy is being retired but we know in comics that is not forever. JQ gives this story a 7.6/10. I suggest if you only know Hellboy from the movies you should check out some of his stories,