TPB Pick of the Week: House of M 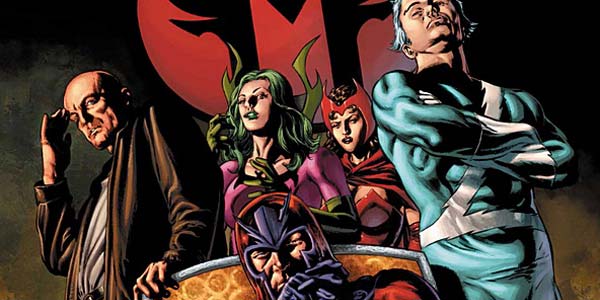 Alternate realities and other worlds are nothing new in comic books. With the upcoming Secret Wars tie in coming, I thought we could look at the original House of M.

DC has the multiverse, where an infinite number of Earths exist, each with parallel versions of Superman, Batman, and all of the other major players in the world of DC comics. Marvel had the Ultimate universe, which serves as a way to retell the classic stories in a separate, but parallel world to the 616 universe (the “normal” Marvel continuity). However, in most alternate reality stories, the ending seemed to undo everything– the characters remembered nothing of the other world when things went back to normal. Such is not the case in House of M.

Wanda Maximoff, also known as Scarlet Witch, was (at the time) the daughter of Magneto. She and her brother Pietro, also known as Quicksilver, are mutants, and have lived a life of oppression at the hands of humans. Wanda’s powers to alter reality had served her well as an Avenger, but they began to take their toll on her mind. Professor Charles Xavier tried to help her, but she quickly lost her grip on reality, which means that she could unknowingly alter the reality of everyone around her. Concerned for the safety of the world, Xavier asks the X-Men and the Avengers to help decide how to deal with the problem. Fearing that Wanda’s death is imminent, Pietro asks Magneto to do something, and suddenly, in a bright flash of light, everything changes.

Peter Parker wakes up to hear his young son crying, and his wife Gwen Stacey asking him to take care of him. Scott Summers and Emma Frost are now married, Hank McCoy never took the serum that made him grow blue fur, The Kingpin has been taken out, Dr. Doom doesn’t need to wear his mask, and Wolverine is a member of S.H.I.E.L.D. along with Rogue, Nightcrawler, Mystique, and Toad, and he has all of his memories of his life before the Adamantium was added to his skeleton.  Mutants are the dominant species on a planet ruled by Magneto in this reality, and they oppress homo sapiens. While a few humans are respected, such as Tony Stark, Peter Parker, and Victor Von Doom, most are terrorized by mutants, and human criminals are hunted down by Sentinels. Operating out of Genosha, a sprawling metropolis as opposed to a desolate wasteland, Magneto and his children are the leaders of this new world.

Eventually, a series of events is set into motion that allows the heroes to remember the truth while living in this lie. Everyone is upset that Magneto used the Scarlet Witch to take over the world, and some are more affected than others, especially Peter Parker. In this reality, he is a celebrity photographer, married to his first love. His Uncle Ben never died, and he knows nothing of the tragedies that he went through in the true reality. He nearly snapped upon learning the truth. By the end of the series, things occur in the Marvel universe that will have lasting effects for years to come.

Nearly every major character in Marvel’s history makes some sort of appearance, either in this series itself, or any of the number of tie-ins.The story is very good, as Brian Michael Bendis takes us on another fantastic voyage. The art team is also great, and makes the book as much fun to look at as it does to read.  The series is steeped in backstory, so this is definitely not for beginning comic readers, but if you haven’t read House of M yet, prepare to be blown away. JQ gives this TPB a 8.1/10