The Marvel cinematic universe has been teasing this since the start of Phase I. Jim Starlin takes us on an epic adventure that is a gem to read. 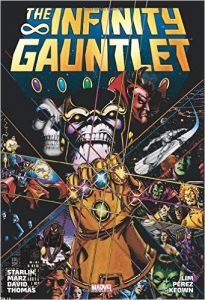 The story is basically this. Thanos has acquired the Infinity Gauntlet which is powered by the Infinity Gems giving ultimate power essentially making him God. He is in love with the female personification of Death and as his gift to her, he kills half of the sentient life in the universe with the snap of his fingers. On Earth, heroes unite with cosmic guardians in a last futile stand against a mad god at the end of the Universe. This story has basically everyone in it since the scope is that grand of a scale. This will make the story a challenge to pull off on the big screen due to the contracts and different studios owning the different properties needed to bring the MCU together.

Jim Starlin does a fantastic job letting you get in the head of Thanos, the “Mad Titan” who’s been frequently teased in the recent Marvel flicks and will be the big bad soon enough on the big screen. However, the main protagonists (Adam Warlock, Doctor Strange, and Silver Surfer) are kind of bland and uninteresting. Also, the huge, INSANE scope of this book can make it hard to follow at times for readers not familiar with the Marvel Universe. More familiar heroes like Spidey, Cap, and Iron Man make appearances, but they’re relegated to secondary roles. In short, for people coming in without a decent background knowledge of comic books, Infinity Gauntlet’s probably going to be a very strange and confusing read, though not an uninteresting one.

The art is beautifully done by George Perez and Ron Lim. Each page is a masterpiece in itself. Space, time, and reality are bent, broken, and destroyed in a cosmic struggle to stop Thanos. Perez and Lin do not miss a beat to show us this.

JQ gives this book a 7.8/10. It will be really interesting to see how the folks at Marvel try to make this work on the big screen.