TPB Pick of the Week- Iron Man: Demon in a Bottle 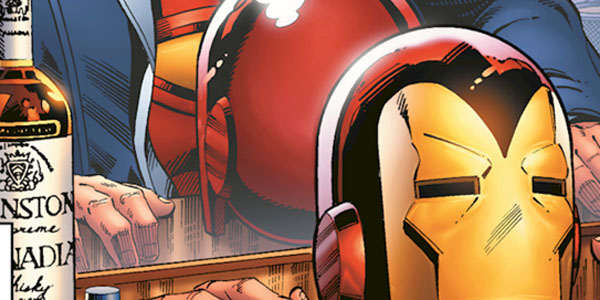 Every hero has his or her definitive story that marks a major impact on the path to greatness or destruction. Demon in a Bottle is one of those stories that does just that.

Comic book fans can certainly appreciate the importance of the Demon in a Bottle storyline both to Iron Man as a character, and comics in general.  This story has its high points, the obvious one being Tony Stark’s 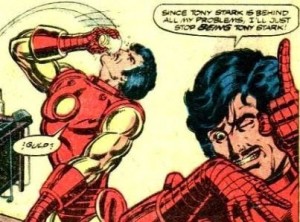 struggle with alcoholism. While this kind of story wouldn’t make much of an impact in today’s world, 25 years ago it was quite a big deal. It definitely added a new dimension to the character, and emphasized the “man” in Iron Man.This story also had the introduction of Justin Hammer as a corporate rival and S.H.I.E.L.D.’s attempt to take over Tony’s company were very interesting developments. Some of the scenarios with Hammer and S.H.I.E.L.D. in this story can be seen as the foundation for the Iron Man 2 movie plot. The main gripe about this story is how fast Tony tackles his problem with alcoholism. It took 40 issues (issue #116-156) to tell this story, and the personal victory of winning his personal battle was done in basically one issue.

The artwork is another high point. While the pencils provided by John Romita Jr. hardly resemble his later, more popular work (they are still quite solid) and are supported by outstanding finishing and inking by Bob Layton, who is acknowledged as the definitive Iron Man artist. Some of the dialogue is VERY dated and laughable at times, but the meat and potatoes of the story still resonates as fantastic.

This is a book that really shouldn’t be ignored if you’re a fan of Iron Man as it tells the story that developed Tony Stark’s character by adding alcoholism to his list of human frailties. This was (at the time) a bold move in an industry that was heavily censored by the Comics Code Authority. 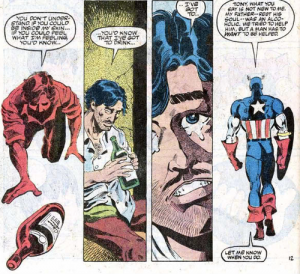