TPB Pick of the Week- Jem and the Holograms Vol.1: Showtime

This week we are doing a little something for the ladies and for all of us with young daughters. Jem and the Holograms were a staple in most of our Saturday morning rituals back in the 80’s if you are old enough to remember.

With most of the Hasbro toy lines from the 80s making a comeback, in one way or another, it was long beyond the time for their “other” girls product, Jem! There was a frustratingly unappealing live-action movie that even old school fans disliked, but prior to that IDW released a very open-minded comic geared towards original fans, plus modern day comic readers.

Jerrica Benton is a shy young woman hoping for her band with her sisters (two of which are adopted) to make it big. They discover that their father secretly invented an AI program named Synergy that can create realistic holograms, which Jerrica uses to get over her stage fright by creating the secret identity of “Jem” (who is oddly supposed to be nearly an entire foot taller than Jerrica), and calling their band The Holograms.

They try entering a battle of the bands to get a record contract, which has them crossing paths with their soon to be rivals, The Misfits. Things get a little steamy when Jerrica’s sister Kimber starts dating the Misfits’ Stormer, plus having to keep Synergy’s existence a secret. This becomes even more hectic for Jerrica as she carries on a relationship with Rio, a rock magazine reporter, who in this version of the story isn’t all that in love with her Jem persona.

The Misfits’ lead singer Pizazz has an auto accident, leaving her voice damaged, so her band needs to get a replacement singer for their joint tour with The Holograms. Synergy gets a glitch around this time, which forms a split personality called Silica. It’s up to a team effort of both The Holograms and Misfits to save the world.

Writer of the book Kelly Thompson really pushes the political correctness envelope but keeps to the source material in a way a reader will respect. Artist Sophie Campbell’s art fits the feel of this book and helps it flow. This comic is shaping out to be really eclectic with its character designs. Aside from being one of the most LGBT-friendly American comics of all time, there’s also some serious creativity given to body-types, ranging from your non-standard heights and weights for high profile females. Still no sign of the 5th Hologram, Maya, but so far the comic is keeping the spirit of the original TV series, the upshot with The Misfits being a bunch of psychotic saboteurs who tried to actually kill The Holograms in every other episode!

JQ gives this book a 7.8/10. Not my normal read but none the less something different and yet very now hitting a lot of social norms that were shunned back in the 80’s. 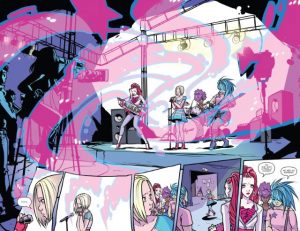