TPB Pick of the Week- JLA: Tower of Babel 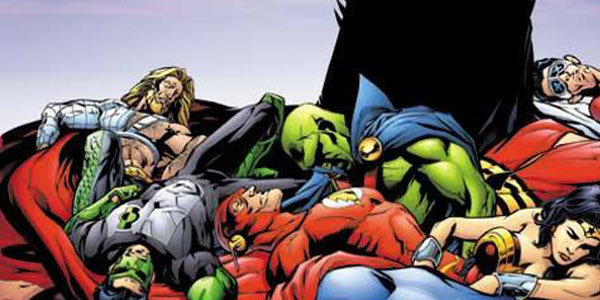 Tower of Babel shows exactly why Batman is not a man to be looked over, but feared. This is why JQ is taking you on a journey into the archives of the DCU.

Normally when we think of Batman, we think of a vigilante who haunts the night trying to bring down the bad guys. I believe that he is much more complex than this. Batman is a man who, having suffered tragedy at a very young age, has vowed never to be life’s victim again. And thus, he does everything in his power to strategize and manipulate in order to make sure that he comes out on top. Like any successful man of power he plans all the way to end, considering every possibility… everything that could and can go wrong in a given scenario. Batman is the sort of hero most people admire because he is willing to do ugly things (short of murder) to accomplish his objectives.

Batman is well aware of what lies behind men’s hearts. They can be loyal to you one minute and betray you the next. This is what has driven Batman to accumulate information on each JLA member. He has studied each member– their character, their powers– and has devised a stratagem to bring each one down, should one of them turn to evil in the future. Unfortunately Ra’s Al Ghul has discovered the information that Batman has been keeping in his lair and has used it to disable each member of the JLA so that he can carry out his plan to “purify” the earth.

When the members of the JLA find out that the root of their misfortune originated with Batman, they vote to expel him, not only because of what Ra’s has done, but also because they all feel that he has betrayed their friendship. By keeping information on each one of them, Batman has essentially shown that he did not think very highly of his teammates in the JLA… while they trusted and admired him. When Batman is cast out, I think it registers on him how badly he has been mistaken about friendship. And sometimes there is far more to just getting a job done.

For all of Batman’s strategics, he never considered what would happen if the information got into the wrong hands. He never stopped to consider how hurt his friends would be. When he’s expelled Batman doesn’t simply walk away and shrug his shoulders. He actually looks hurt that his teammates have cast him aside for what he has done. It shows a different aspect to Batman than simply the arrogant loner– we see that he actually cares about what other people think of him, and the toll the loss of friendship takes on him.  In case it looks familiar for DC Animated fans, this book also spawned the Justice League: Doom feature.  Mark Waid did a good job on this story, and adding in some fantastic art makes this book is one of the best.