TPB Pick of the Week: The Last Knight – An Introduction to Don Quixote

Will Eisner continued his series of adaptations of classic tales with this charming and delightfully humorous rendition of Miguel de Cervantes’ Don Quixote.

We cannot deny what Will Eisner’s impact has done for comics. He was recognized internationally as one of the giants in the field of sequential art, a term he coined.

Don Quixote was quite a gentleman, man of honor and idealist, even if he was a couple cards short of a complete deck, attacking windmills as if they were his enemy. It is Quixote’s selflessness and gallantry that make the Man of La Mancha a legend as retold to us by his faithful friend and servant Sancho Panza. 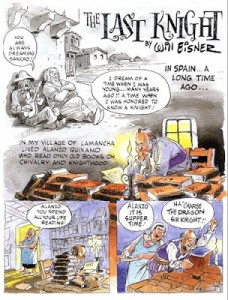 Eisner offers a collection of vignettes that show Don Quixote as a clownish madman whose escapades are slapstick and pointless. There is no Knight of the Woeful Countenance here, this is a Don Quixote whose popping eyes and snaggletoothed grin display a manic energy. If he is not the skinny visionary, neither is his horse the rack of bones described by Cervantes. Even the not-so-fair Dulcinea is different: here she is changed into Dulcinea de Tobasco- a stout harridan who tries to sell the Don some salt pork. However, the greatest change in the story is the ending in which Cervantes himself appears in the bedroom of the dying knight to proclaim that Quixote’s deeds “show people the value of dreams and dreamers”.

Kids and adults alike will find this a colorful, intriguing presentation with enough insight and depth to do justice to Cervantes’ creation, yet sufficiency filled with enough action to make the comic format stand on its own.  This book proves how great Will Eisner was, showcasing why he is missed by comic book fans of the old school. In a career that spanned nearly eight decades, from the dawn of the comic book to the advent of digital comics, Will Eisner was truly the ‘Orson Welles of comics’ and the ‘father of the Graphic Novel’. Will Eisner is also honored every year with a week dedicated to him. This happens the week of March 6th every year and promotes literacy, free speech, the love of graphic novels, and Eisner’s legacy.

JQ gives this book a 9/10. It is kid friendly and they will learn a thing or two.