With Netflix bringing a solo Luke Cage series to the small screen, let us take a trip down memory lane and see where the Hero for Hire got his start. 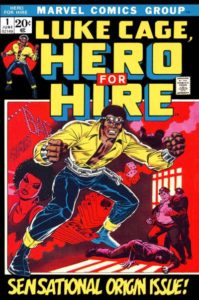 The saga begins as Carl Lucas, a Harlem-raised tough guy is framed for drug possession and incarcerated. He then gets a chance at early parole by becoming a guinea pig in Dr. Burstein’s medical experiment. During the process, a guard sabotages the machine hoping to kill Lucas but instead grants him superhuman strength and durability. Lucas escapes, adopts the cover identity of Luke Cage and returns to the Big Apple to use his newfound powers to clear his name and clean up the mean streets (and make some cash on the side) as a Hero for Hire.

Cage’s adventures and adversaries seemed to walk the line between Silver Age Spider-Man and modern Daredevil. He goes up against costumed, gimmicky criminals like his former friend Diamondback (who has a snake outfit and wields trick-laden throwing knives), Lionfang and his mentally controlled predatory cats, Chemistro, the self-proclaimed Master of Alchemy, Steeplejack who has retrofitted his construction-worker tools for warfare, the vigilante team of Discus and Stiletto, and even the Circus of Crime. In addition to that, he also fights gritty real-world street crime in the form of Senor Suerte (a swarthy illegal casino owner), the ruthless drug kingpin Cottonmouth, and even a bitter Vietnam vet with a titanium morning star grafted in place of his missing hand. Also, for pure cheesy comic book glee, Cage uses his brute strength and well honed street fighting prowess to humble Dr. Doom.

Similar to Iron Fist, the series is an ongoing tale of one man’s search for redemption and his true calling. Fortunately, these stories written by a huge team of writers (Roy Thomas, Archie Goodwin, Steve Engleheart, Gerry Conway, and Tony Isabella) proved to be not nearly as campy, overdone, or tongue-in-cheek as I was expecting given the era that these stories were written. Even though I wasn’t particularly fond of Power Man, I am still thankful that Marvel didn’t feel the need to give him a name with the word “Black” in it (DC Comics, I’m looking at you!). Cage’s well-known jive-talkin’ was also never heavy-handed or played up for laughs and the main character and 70’s urban atmosphere never seemed exploitative (even if all of the women Cage met had afros). Case in point: there is one scene toward the end in which Dr. Burstein dismisses a reporter doing an expose on black superheroes by saying he should be concentrating on a hero’s sense of honor and not the color of his skin. Sometimes you can find profound messages even in comic books, folks. The art team of George Tuska, Billy Graham, John Romita proves again that this era of comics was like no other in the ways they were drawn. 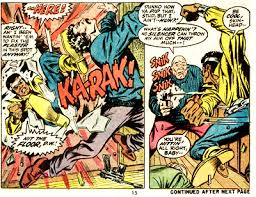 I was very surprised at how good this essential really was. It handles 70’s racism issues well and is very well written. After years of reading Marvel comics I found out things about this character I never knew. JQ gives this book a 7.5/10.