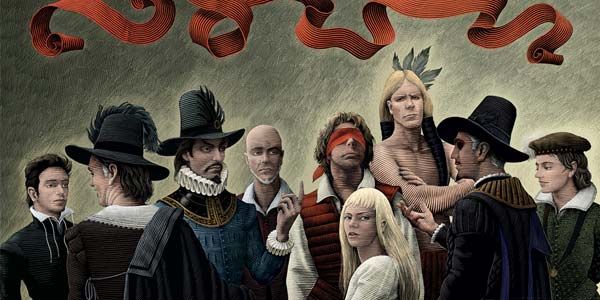 Neil Gaiman offers a unique spin on the heroes and villains of the Marvel Universe, which dawns 360 early in this intriguing story.

I have always been a big fan of Marvel’s WHAT IF concept, as well as other alternate reality stories, provided that events are presented in a logical fashion.

When I first heard of 1602 by Marvel, I was under the impression that Neil Gaiman was simply going to take the easy way out: “re-imagining” the heroes and villains of the Silver Age Marvel Universe as existing in England during the reign of Queen Elizabeth. After reading the TPB, however, I can say that this is definitely not a re-imagining, nor even a “what if” story, but more of a very original mystery with an excellent twist that makes sense. Surprisingly, 1602 can comfortably exist within normal Marvel continuity. As a result, I enjoyed it immensely. I was also ridiculed at the comic shop for even thinking of a Neil Gaiman story that way. A lot of people have bashed this book for not being The Sandman or one of Neil’s even more lofty projects, and for daring to feature conventional superheroes, if in a rather unconventional manner.

In order to not spoil the plot, I’ll be as basic as possible: the Marvel Universe has arisen 360 years early, triggering the possible destruction of the universe. Of course, it’s up to the heroes, and a few villains, to try to set things right. You’ll see many familiar faces here, especially if you’re moderately familiar with Marvel’s Silver Age characters. Even if not, it isn’t too difficult to determine who is who. Gaiman does a wonderful job of translating the heroes of the Marvel Universe to a historic setting. And he makes the necessary adjustments: Matt Murdock doesn’t become a blind brawler for justice, but rather a blind minstrel/guide, which allows Daredevil the freedom of movement a hero needs in Gaiman’s 1602. Similar adjustments are made for a wide range of Marvel characters. Gaiman writes a very tight story that moves quickly, and Adam Kubert’s art is exceptional, especially when paired with the skilled coloring of Richard Isanove. Scott McKowen provides beautiful woodcut covers for the series and the collection. All contributors to this story complement each other quite well, making 1602 an essential part of any comic library.

This book was interesting to say the least and pre Marvel Now it made TONS of sense. If you have not read a Marvel story before NOW! this story may get lost in translation as some of the characters have changed dramatically since the original publication of this book. JQ gives this a 7.5/10.