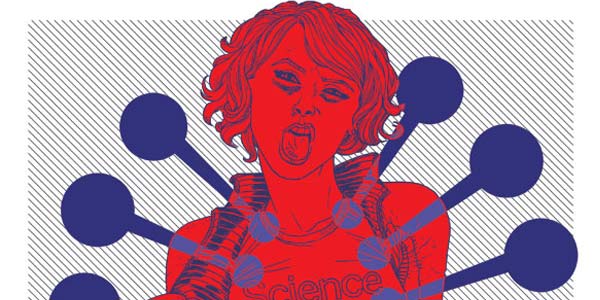 “SCIENCE IS THE NEW ROCK ‘N’ ROLL!” Image Comics brings us a book that will rock your face off! If your instrument was quantum physics.

As the research supergroup World Corp., they became the most celebrated scientists of all time. They changed the world – and we loved them for it. But where did it all go wrong? And when progress is made at any and all cost, who ultimately pays the price? Right from the beginning, the intriguing notion of what the world would be like if scientists, rather than rock stars, became the media obsession. The four young scientists dressed in 1960’s floppy haired splendor at the beginning, are compared to the Beatles. And like the Beatles in the 1970’s, each goes very separate ways in an era of drugs and pleasure. Two stay good friends, one drops out altogether in a haze of drugs and psychoanalysis, and the last becomes a megalomaniac.

The story and cast expand quickly; with the new characters becoming slightly hard to remember. Best way to explain this is to imagine The Walking Dead, Sons of Anarchy, or Game of Thrones cast and how each of those shows use large casts to build stories. Eventually the characters gain defining and interesting traits and become much easier to distinguish from each other.

This TPB collects Nowhere Men #1-6. When a writer-artist team is truly clicking, something magical can happen, and it does here. Writer Eric Stephenson and artist Nate Bellegarde juggle multiple characters and  locations (both in geography and in time), yet personalities and appearances remain distinct. The creative team has also supplied a realistic atmosphere with personal letters, magazine covers and interviews, World Corp. logos and advertisements that help fill-in the back story. This series is all about how far we take scientific exploration and what is too far to achieve that. It’s rated T for Teen but 16 may be the youngest I could recommend for it.

This book was a breath of fresh air and an outstanding read!! I was floored by the concept and wanted more. JQ gives this book 9/10.