Boom Studios has been on a roll with their comics lately and with Kylie Higgins at the helm, Mighty Morphin Power Rangers is a hot title to read. 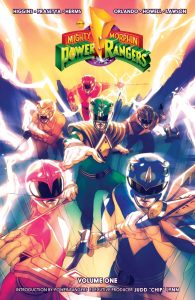 This comic takes place after Rita Repulsa’s mind control over Green Ranger (Tommy Oliver) was lifted. Tommy struggles to find the balance between the plights of high school, making new friends, and the dangers that come with being a hero. Kyle Higgins and artist Hendry Prasetya explore the untold story of the life of the Green Ranger as he struggles to overcome his demons and learns to trust again. This is also a learning moment for the other rangers as they are having some issues just trusting a guy who tried to destroy them.  When Rita starts tormenting him from within his own mind will he have the strength to face her down so he can finally get control of his powers and will the other rangers trust him when they find out that she has still been in his head?

Tommy finds the strength to face her down and tries to fully control his powers? Tensions are high on and off the battlefield but when Rita manages to take over the Dragonzord using a fake dragon dagger Tommy’s secret is out in the open. The rangers get over their differences and reclaim the Green Rangers power but like any other day in Angel Grove peacetime only last moments.

This TPB covers issues 0-4 and has a nice gallery of the many covers that Issues 0 and 1 offered. Kylie Higgins writing on this book is amazing. It is a very balanced mix of updated yet nostalgic take on the old show. JQ gives this book a SOLID 8.8/10. Pick it up if you can!