As Rita enacts her plans for world domination, the Rangers are left powerless and without Zordon to call on.

The Power Rangers have often bumped heads with Rita Repulsa and her army of created monsters and putties, but they’ve never met anyone like the Black Dragon.

This new enemy takes center stage in Vol. 2 of Mighty Morphin Power Rangers, which puts the Rangers in a compromising situation. The Dragon is more powerful than any other enemy they’ve faced thus far, but Rita isn’t resting on her laurels and will use the opportunity to hit the Rangers from all sides. The Black Dragon is strong, so strong that the almighty Zords are not enough to win the day. It will take some outside the box thinking to overcome their newest foe. For those who have been keeping up with the current issues, this volume will set the stage for an even more powerful enemy (which will blow your mind), and a whole new world for the Rangers to explore. This is the greatest threat they have ever faced since freeing Tommy from Rita’s control and the world hangs in the balance.

This volume shows that the Rangers can’t just beat down an opponent with one attempt. They have won battles in the past, but with the Black Dragon, he is more than they have ever faced. With the Command Center destroyed and taken over by Rita, the Rangers have no access to Zordon or Alpha. They need to resort to each other’s strengths to get through this and win the day. Billy finds out that Tommy’s power coin works slightly different from the others and the fun ensues when the Power Rangers tap into Tommy’s powers! 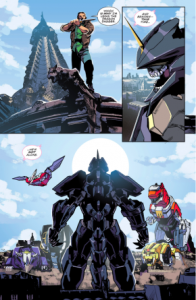 From writer Kyle Higgins and artist Hendry Prasetya this volume collects issues #5-8. Higgins has proven that he knows what he is doing with this franchise and has my full on support in his writing.