TPB Pick of the Week: Ms. Marvel Volume 1: No Normal 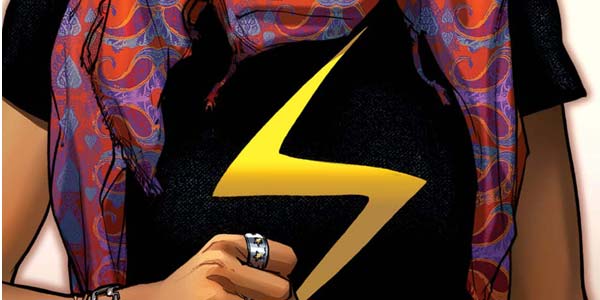 Comic shops can’t keep this book on shelves, so I had to see what makes Ms. Marvel so… Marvelous!

Marvel Comics relaunched the all-new Ms. Marvel via their All New Marvel Now! Point One campaign and this groundbreaking heroine that has become an international sensation! Marvel hired the acclaimed writer G. Willow Wilson and beloved artist Adrian Alphona to the helm of this book. Wilson did a phenomenal job in keeping my interest in this story, especially since this is not my type of character. Alphona’s art was not too shabby either to help compliment the story.

The main character is Kamala Khan and she is an ordinary girl from Jersey City. That is until she is suddenly empowered with extraordinary gifts. But who is this all-new Ms. Marvel? Teenager? Muslim? Inhuman? As Kamala discovers the dangers of her newfound powers, she unlocks a secret behind them as well. The question the writer has you asking that makes the story interesting is Kamala ready to wield these immense new gifts? Or will the weight of the legacy before her be too much to handle? Kamala has no idea either.

At first I was not too sure about this book but after reading Volume One I see the appeal and applaud Marvel for stepping outside the box on this one. Volume One contains Issues 1-5 of Ms. Marvel from the All New Marvel Now! Point One series!  JQ gives this book a 8/10. Check this book out as it is a hot ticket and she is starting to make cameos in other Marvel books, like the most recent Amazing Spider-man issue.