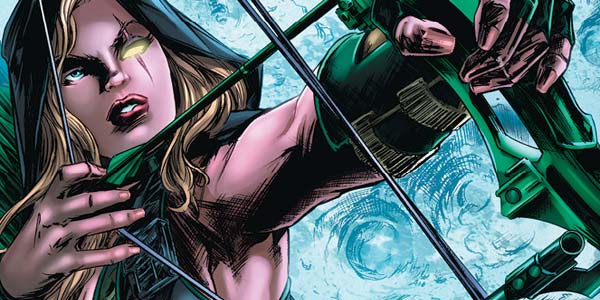 Can Robyn rise up and be the hero that Nottingham needs. Find out in the sequel, Robyn Hood: Wanted!

Robyn Hood: Wanted picks up a year later from where the previous story left off. Robyn has returned to Earth and the people of Bree have started over in their newly renamed town of Nottingham. But all is not right with either world.  Robyn finds herself wanted for the murders she committed on Earth and the people of Bree find themselves terrorized by the Sheriff of Nottingham. The first chapters bounce between Earth and Bree as the reader catches up with what has been happening in both worlds.

More is revealed of the characters and the story is still very dark.  I love the way the traditional Robin Hood story has been rewritten for the part of Robin to be played by a woman. I also liked her jokes about her ‘clothing’, or lack thereof, in Nottingham. As I’ve said before though about the women’s clothing in the Grimm Fairy Tales Universe, I love the illustrations as well. All the artwork that I’ve seen from the Grimm books has been amazing and this one was no exception. You can definitely tell the difference between Earth and Bree/Nottingham. While both are drawn well, Earth’s coloring lacks a certain luster and richness to it; making it seem the less realistic of the two worlds.

Joe Brusha and Ralph Tedesco have joined forces to create a hugely entertaining graphic novel. Four writers have combined their talents to write the story – Joe Brusha, Raven Gregory, Ralph Tedesco and Pat Shand, and they have succeeded in writing an engrossing one. The artwork by Larry Watts and directed by Anthony Spay is beautiful to say the least.

The book does end with a cliff hanger that runs into the ongoing title. As with the other graphics I’ve read from Grimm Fairy Tales, I wouldn’t recommend this for the under 18 crowd, because of the gore and the whole clothing thing.  It’s not so bad in this book, but still.  Overall I really enjoyed this edition of the Robyn Hood series and I highly recommend it. JQ gives this a 7.9/10.