What do you get when you combine Star Wars and Romeo and Juliet? You get Saga. 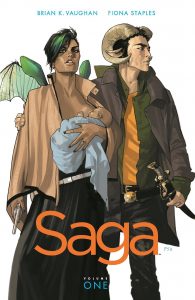 Saga is so tremendous. I don’t believe I exaggerate when I say that Saga is practically perfect. Brian K. Vaughan’s writing is like none other and ogling Fiona Staples’ ridiculously gorgeous artwork really makes you forget about what’s bad until with comics until you read something as good as Saga.

I’ll try not to indulge in too much detail. I would be a total jerk to completely spoil things for you, plot-wise and even character-wise. Suffice this: As already mentioned, there are elements of Star Wars and of Romeo and Juliet here, but within that context Saga is a daring and original masterpiece. It seamlessly melds science-fiction and fantasy. The narrative concerns star-crossed lovers Alana and Marko, two soldiers from opposing sides of an ongoing galactic war. He was a prisoner-of-war. She was a prison guard. And then they ran away together. On the armpit planet called Cleave, Alana and Marko and their baby girl desperately try to slip by enemy forces. A generous bounty placed on their heads attract the most dangerous bounty hunters in the universe. Oh, and the baby narrates the story.

Saga reeks of freshness and originality. Vaughan is so very good, and this may be his best stuff yet, and, mind you, I’ve read Y: The Last Man  and The Runaways. Saga has smart, funny and subversive and thought-provoking and, yes, sometimes graphic writing. Seems as if there’s a “What the f–!?” moment every few pages of each page, whether it’s a plot twist or some startling imagery. A TV-headed robot sits on the toilet reading a romance novel, and this isn’t even the most eyebrow-raising thing that this robot has does on page. I love the interactions between our two leads. Alana and Marko are wonderfully fleshed-out. They come off as real people. Meanwhile, Vaughan loves to dabble in gray areas. Even the projected big bads, Prince Robot IV and the bounty hunter called The Will are fascinating people and aren’t depicted as straight-up evil. In this galaxy-spanning conflict it’s too early yet to tell the virtuous from the non virtuous. But they’re all coming for our scampering couple.

If you’re poking around for something deeper, then mull over the evolution and ramifications of this war. Alana is from Landfall, the largest planet in the galaxy. Marko is a native of Landfall’s sole orbiting satellite, the moon Wreath. Because direct conflict between Landfall and Wreath would result in absolute annihilation, each side has outsourced the actual combat to other worlds. This has the effect of Landfall and Wreath’s respective ideologies and belief systems subverting countless other alien cultures. So the irony is that while the war is being relentlessly waged by other worlds on their behalf, Landfall and Wreath themselves exist in a state of peace. 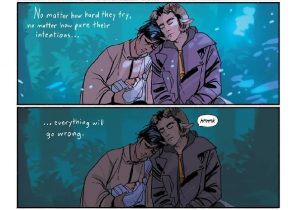 Fiona Staples is killing it with her striking artwork. I don’t know how much input she has in books meticulous world-building, but she brilliantly realizes Vaughan’s concepts on page. This sort of story could very easily spiral towards a gritty tone. Staples applies sure and sharp strokes to define her characters, and yet her background scenes are rendered thru loose and subdued washes. This juxtaposition tends to lend a softer edge. SAGA’s world looks both brutal and beautiful.

I got on this train late, in fact I wish I would have read this from the start. JQ gives this book a 9 out of 10.