DC Comics, Dustin Nguyen, and Derek Fridolfs take us on another adventure with DC’s finest as kids.

In this second book of the Secret Hero Society series, we see things from the point of view of Clark Kent. Whereas the previous book was written in Bruce Wayne’s point of view. Clark Kent meets up with his friends Diana and Bruce at summer camp. Through the use of journal entries, camp schedules, and comic panels, Clark tells the story of his adventures at a rather unusual summer camp. Naturally, he and his pals have to investigate to figure out why so many kids are disappearing. It only takes Bruce a day to realize that something is amiss. And a couple of days before Clark decides to agree to re-establish their little crime investigators group and work together with a few other characters to try in solve the mysteries of the camp.

It’s kind of fun to see all the different superheroes and villains before they’ve completed their transformations. While the book is all black and white, the pages are broken up by the variety of different illustrations, which I particularly enjoy. This book has all the characteristics the previous book had that pulled me in. It was written in the same unique style. With Dustin Nguyen’s Incredible illustrations to go along with the story, this is a must buy for DC fans and their children. If you liked little Gotham and the previous Secret Hero Society Book then this will not disappoint! 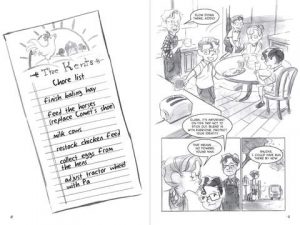 Nguyen and Fridolfs are working on the third book in the series and given the track record, they seem to have something going here. JQ gives this book a 7.5 out of 10.