TPB Pick of the Week: Serenity (VOL 1) Those Left Behind 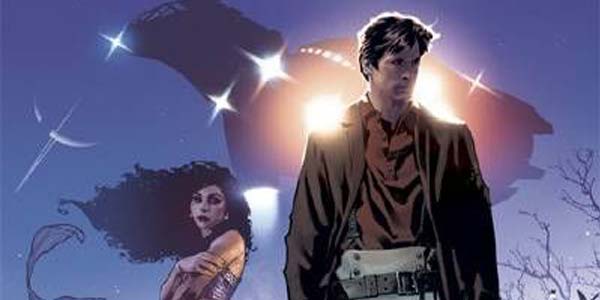 This is going to be a mixed review as I LOVE all of Joss Whedon’s TV shows and his movies have been on point as well. And this graphic novel from Dark Horse Comics seems to fall short.

What it boils down to is if you are interested in knowing what happened between the television series Firefly and the movie Serenity you get your answer here. The downside is the plot of this little graphic novel is not Joss Whedon’s best.

This book puts together all three comics from the Serenity comic book mini-series that came out a little bit before the movie. The artwork is great. The dialog flows exactly as if you were watching an episode of Firefly. You also get a couple questions a few fans have been asking answered.

What limits the book is the main story around this. It’s rather cliche and kind of comes from way out into left field. It doesn’t make too much sense if you think about it and it really doesn’t further the Firefly story. Keep in mind I’m talking about the main story and conflict of this series. Not those questions this series answers for fans.

Does the book have any redeeming values? As I stated above, it is well-drawn. Storywise, it does provide some filler between the end of the series and before the start of the action in the movie. That is not a small thing, but the problem is that there just isn’t much to it. In fact, the whole thing feels more like an outline rather than a story.

Should you buy this graphic novel or not? I say if you’re a fellow Bowncoat and fan of the Firefly series and have the money burning in your pocket then go for it. Granted the comic book series probably has more collectible value (especially the alternate covers), but this book puts it all in one convenient place. JQ gives this a 5/10.