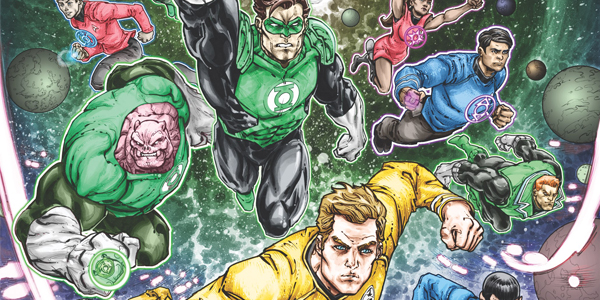 The crew of the U.S.S. Enterprise meets the Green Lantern, Hal Jordan in this strange but fitting crossover.

With yet another example of crossover madness, Hal Jordan and the crew of the U.S.S. Enterprise (from the new movies), who usually exist in different universes end up in the same place. The story is fun, full of action, and has characters behaving as fans would expect them to behave. The plot isn’t deep but it has enough clever touches to deliver steady entertainment. The setup leaves room for a series of new team-up adventures involving the Green Lantern corps (and some other colors) in the Star Trek universe.

The Enterprise finds an alien body while on patrol of a planet. This body is holding lantern rings of various colors of the spectrum. Bones is put in charge to find the origin of the alien body, and Scotty is told to figure out what the rings do. Using Dylithum Crystals (I know I too said it with my best Scotty voice while reading) he hits the rings thus charging them sending the rings to find suitable bearers in this universe.

This surge of power alerts Hal Jordan and he is whisked away along with a few familiar faces to understand what is happening. The rings attach themselves to Uhuru (Violet), McCoy (Indigo), Chekov (Blue), a Klingon (Yellow), a Romulan (Orange), and a Gorn (Red), which makes a ton of sense given the personalities of the chosen.  Meanwhile, Jordan and Kirk explain their universes to each other. Jordan’s universe has gone sour — like, destroyed by Nekron (Blackest Night). Unfortunately for the Trek gang, Nekron is setting his sights on their universe. And unfortunately for the new Enterprise Lanterns (and Jordan), they don’t have any batteries with which to recharge their rings.

Nekron sets his sights on the destroyed world of Vulcan. He flexes his muscles and resurrects the planet but we know Nekron is being of death and with the revival of Vulcan come a bunch of Black Lantern Vulcan zombies. 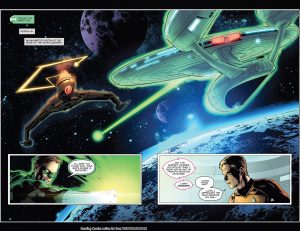 Writer Mike Johnson does a good job taking the two franchises and giving them proper justice. With Green Lantern anyone who has followed since Geoff Johns run will understand what is going on more so, but even for Trekkies that have not can follow without confusion. Same goes for Lantern fans that may not have watched the 1st or 2nd Star Trek reboot.

The art by Angel Henandez is fantastically done. The auras, space settings, and the total awesomeness of the Enterprise is shown with amazing details and a sense of realistic sense of the movie characters likeness.

JQ gives this story a 8.7/10, awesome crossover, with fantastic art!