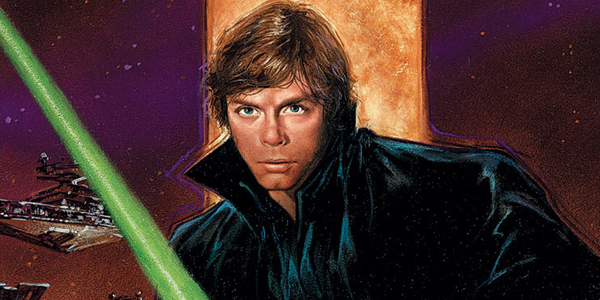 With all the hype around Star Wars I thought it would be appropriate to share a book that we all thought was a shoe in for the next trilogy, Star Wars- The Dark Empire Trilogy was published by Dark Horse Comics.

The stories in the book were written by Tom Veitch with art by Cam Kennedy and Jim Baikie. The stories collected in this TPB are Star Wars- Dark Empire #1-6, Star Wars: Dark Empire II issues #1- 6, and Star Wars: Empire’s End #1-2.

This story takes place 10 years after Return of the Jedi, a New Republic has been formed, but the galaxy is still not free. The Empire has been mysteriously reborn under an unknown leader with a great weapon of power. The New Republic is being held together and defended by Princess Leia and Han Solo while the savior of the galaxy, Luke Skywalker, fights an inner battle as he is drawn to the Dark Side like his father.

This struggle sets Luke on a quest to rebuild the Jedi Order, as well as himself. Luke sets himself on a journey trying to find any and all Jedi that may have survived the purge at the end of the Clone Wars. As the Imperial war machine is preparing for war, the evil behind it has it’s eyes set on the unborn child of Leia and Han. If the evil is not stopped then the galaxy will plunge into a new dark age. Only the strength of the Jedi can overcome the power of the dark side.