After a fun re-introduction into a galaxy, far, far away, STAR WARS is off to a good start and with each story gets better.

These stories are still taking place between Episodes IV and V. There is plenty of action, proper characters, and fine art to supply it all. With the second volume though, writer Jason Aaron does continue the better aspects while injecting his own pathos while still keeping the nostalgic tone to appease the fans.

Luke Skywalker is having trouble finding guidance in the ways of the Jedi. By reading the journal of Obi-Wan Kenobi  and gets the idea in order to know more about the Jedi history, it’d best be to go to Nar Shada, the appropriately nicknamed Smuggler’s Moon, a planet where some of the most dangerous people inhabit. Things don’t go as they planned for Luke who runs into a whole heap of problems as the Jedi Temple doesn’t exist anymore and needs to know more about them through scrupulous means. And Han Solo, Princess Leia, and Solo’s “wife” Sana comes to a head as Sana wants her husband back, but they to have problems of their own as the Empire is on their tails.

Volume 2 picks up the same tone from volume having plenty of characterization, nostalgia, and action with laser fighters, Tie-fighters, our main cast using light sabers! (wait until you see that). Balancing out the fighting and laser shooting, there is still the occasional light banter, specifically Leia and Solo over Sana and their marriage while they run away from the Imperial Empire and the chaos that follows. 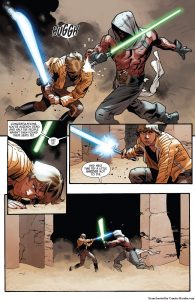 An interesting thing Jason Aaron does is try to play down on the nostalgia factor and try to introduce new aspects into the ever-growing Star Wars universe. The planet Nar Shada and characters like Grakkus the Hutt, Game Master, Bounty Hunter Dengar and Han Solo’s “wife”, Sana. We all know these characters do not have a lasting impact on the feature films, but Aaron is starting to show they could possibly fill in some blanks that would explain things from Episode IV to V.

Stuart Immonen does majority of the art here and I think his art suits this comic better. Immonen’s art is cartoonish, but it’s vibrant, highly expressive, and gives the action a massive sense of kinetic energy to Aaron’s scripts.

The beginning of this book is dedicated to Obi-Wan Kenobi’s memoirs from his time in exile on Tatooine. I really enjoyed Aaron’s exploration of the character. We get to see the immense difficulties for him to simply stop being a Jedi on a planet full of villainous beings and look after Luke without interference of training him on behalf of Uncle Owen.

Even with a slower main story pacing and love triangle being a tad too long for my taste, this book is still an enjoyable read. Plenty of action, stellar art, and an excellent Obi-Wan story keeps things on good terms.