TPB Pick of the Week: Suicide Squad Vol.1: Kicked in the Teeth (New 52) 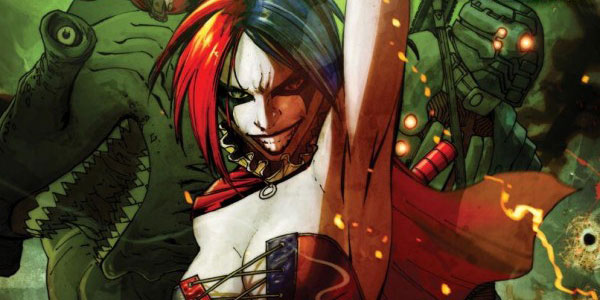 Yes I know the interwebs are over flowing with movie news about the Suicide Squad, but it seems not many people talking know of ANY comic history of the team itself. Let us help you with that!

I was on the fence with the new take on Suicide Squad. I was not on the hate train because of Harley Quinn’s new scantily-clad costume or Amanda Waller looking like a supermodel, but I just wasn’t sure that anyone could come up with anything new involving the handful of hapless antiheroes that Gail Simone had handled so well in the past. Instead, writer Adam Glass injects a Dirty Dozen-type vibe into the comic and characters, giving us a brilliant takes on Deadshot and King Shark, and a surprisingly cool new origin for Harley as well. It’s quick, kinetic action throughout, with solid artwork from Federico Dallocchio as well.

This book contains the first seven issues of the New 52’s Suicide Squad. I found it to be extremely entertaining and a fun read. The series is definitely for adults, as there are some strong sexual situations, and this series is one of the more violent in the DC Universe’s New 52, with people getting eaten alive or ripped in half. Many people die in this series in amazingly terrible ways, and I cant help but love it.

I felt this book is less about the actual missions, and more about the interactions between the Squad. It takes an uber-mega-boss to get the Justice League together, and then all the focus is on defeating the bad guy, but this series is more focused on the team’s needs and personalities. I really liked getting to know more about Deadshot, and the relationship between Harley Quinn and the Joker.

Suicide Squad is an overall fun read, and I would (and have) recommended this book to my friends. The amazing art and a story full of twists and turns is a great combination.  This new take on the Suicide Squad is quite good, and deserves your attention.