As the surviving Squad members attempt to recover from their disastrous Gotham City mission, we learn a dark secret that has been festering in the team since issue #1 in the new 52 world: a traitor stalks the Suicide Squad! 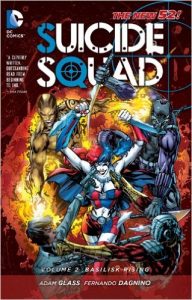 This book is a fun read, with a bunch of DC baddies trying to work of their prison debt by doing insane missions for Amanda Waller. This book begins with the recovery of the team members from the events of Suicide Squad Vol. 1. The squad has a run in with Resurrection Man (which this TPB does include the tie in issues that the Suicide Squad had with his title at the time.) and his powers prove to be a challenge for our band of misfits.

Amanda Waller takes a large role in this storyline, showing a bit of her personal life, as well as the birth of her idea of the Suicide Squad. She proves herself to be pretty bad-ass, and she hints that she had a relationship with Regulus and Team 7. Her methods are tested as she is almost forced to ignite the nano bombs in the squads necks.

Some of their missions have the team go through Gotham and Metropolis. The Squad has to avoid the attention of Batman and Superman in order to succeed. Despite being criminal loners, the villains are starting to become a team. Harley is still Harley and has some crazy dialogue. Deadshot is still the force to be reckoned with here as he tries to lead this band of misfits. King Shark has some interesting moments that brings back a former team mate that was thought to be lost in volume one. Not to mention the return of Captain Boomerang! 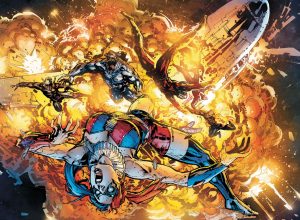 Adam Glass tells a very interesting story that (at the time of release) seems liked he was trying to fit the political agenda at the time. It felt like a sequel to a movie as the characters jumped right where we left them. Fernando Dagnino’s art is a tad choppy at times. It is not a total turnoff but there are a few panels that you may have to look at a few times to get the picture.